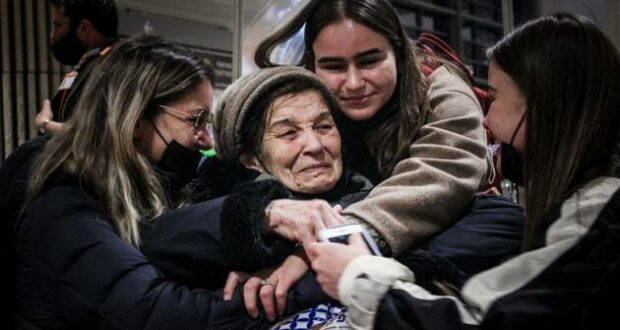 Raisa reunited with her granddaughters at the airport in Israel.

Israel has rescued 160 Ukrainian citizens, including a Holocaust survivor, as Russia continues its relentless attack. The Ukrainians, including many elderly, had escaped across the border to Moldova.

United Hatzalah, a volunteer-based emergency medical services organization, was responsible for the airlift and chartered a flight on Israel’s national airline, El Al.

Raisa, a 90-year-old Holocaust survivor who has difficulty walking, was living on her own in Odessa. Her son had passed away two years ago due to illness. Her three granddaughters, who all live in Israel, are her only remaining family.

When Russia invaded Ukraine and began targeting civilians, millions have fled their homes across Europe’s largest nation. Official estimates put the civilian death toll at near 3,000 but observers say the number could be as high as 50,000. With the amount of bombing taking place, rescue teams have not been able to dig through the rubble of hundreds of apartment complexes and high-rise buildings destroyed by the bombardment.

Raisa’s granddaughters reached out to United Hatzalah and asked them to help save the elderly woman’s life.

Rabbi Hillel Cohen, director of United Hatzalah in Ukraine, arranged for an ambulance to bring her to the Moldovan border. There she met United Hatzalah’s volunteers, who brought her food and clothing and checked her medical status.

On Wednesday, Raisa was brought to a refugee shelter run by the local Jewish community.

Early Thursday morning, together with other Ukrainian refugees, she was brought by bus to the airport in Romania, where she boarded a plane to Israel.

“When the plane arrived in Israel, there were a lot of tears,” said United Hatzalah Vice President of Operations Dov Maisel, who accompanied the refugees for the return trip.

“I’ve seen my fair share of disaster zones and I don’t get emotional easily, but seeing Raisa reunited with her granddaughters brought me to tears.”

“What happened here was a miracle,” said Michal, one of Raisa’s granddaughters. “Thank you from the bottom of our hearts.”