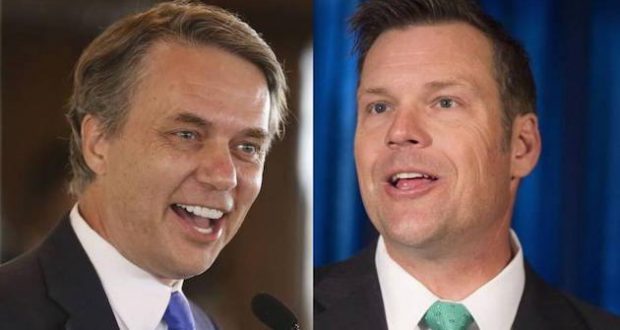 Collier and Kobach battle it out but both are pro-life.

In a what could be stunning defeat for an incumbent, Kris Kobach leads Governor Jeff Colyer in the current vote count.

The Kobach-Colyer race was considered a key test of whether President Trump’s late endorsement would prove decisive for Kobach. The race is currently much closer than polls had indicated before the Trump endorsement.

“Kris Kobach, a strong and early supporter of mine, is running for Governor of the Great State of Kansas. He is a fantastic guy who loves his State and our Country – he will be a GREAT Governor and has my full & total Endorsement! Strong on Crime, Border & Military. VOTE TUESDAY!” Trump said on Twitter.

At a late afternoon news conference in Mission on Monday, Kobach, the Secretary of State, called Trump’s endorsement “a huge boost.” Kobach said the support would help him with undecided voters ahead of the Tuesday primary.

The state’s Democratic nomination went to liberal State Sen. Laura Kelly, who defeated four other candidates in the primary. The 68-year-old has served 14 years in the Kansas Senate and is the top Democrat on the budget committee.

Previous: Do you own stuff or does stuff own you?
Next: Missouri primary election results not without surprises