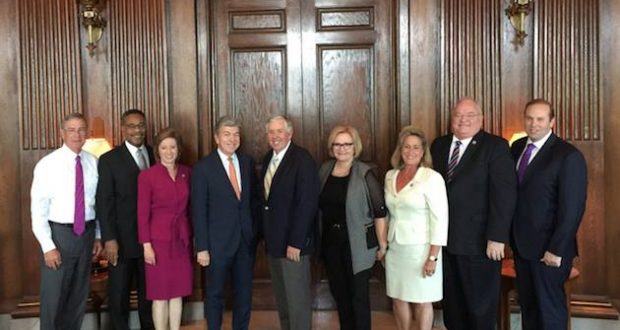 One of the first acts of Missouri’s new governor resulted in bipartisan support and praise from the state’s congressional delegation.

Republican Gov. Mike Parson, a strong Christian, called a rare meeting yesterday to discuss a variety of issues facing the state, including infrastructure and the opioid crisis.

Several lawmakers said their relationship with the current governor was already better than the one they had with Eric Greitens, who resigned less than two weeks ago.

“I thought it was really refreshing that he reached out,” McCaskill said, referring to Parson. Conversely, McCaskill said she couldn’t specifically recall a single conversation she ever had with Greitens, who was known for frequently clashing with lawmakers of both parties.

“This governor appears that he wants to work with everybody instead of fight everybody,” McCaskill said.

Hartzler said her communication with Greitens had been minimal, while a long history of working with Parson has made outreach much easier.

“I can text him, and he will text back quickly,” Hartzler said.

Her words were echoed by central Missouri Congressman Blane Luetkemeyer. “We’re already one meeting ahead of both of the previous two governors,” Luetkemeyer said, referring to Greitens and his predecessor, Democratic Gov. Jay Nixon who was also not known for working across the aisle.

That praise has been repeated by many state lawmakers in recent weeks, due partially to their familiarity with the new governor. Unlike Greitens, Parson has had a long history working in public, most recently as the state’s lieutenant governor.

Republican Sen. Roy Blunt and Reps. Ann Wagner, Jason Smith and Billy Long were also present at Monday’s meeting, along with Rep. Emanuel Cleaver, who represents much of the Kansas City area.