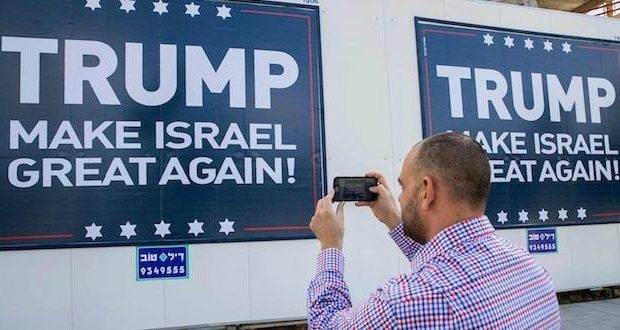 An Israeli snaps a photo of a sign that appeared in thousands of locations across israel since last week.

JERUSALEM, Israel – President Trump is being hailed as courageous for implementing a 23-year-old law mandating the move of the U.S. embassy to Israel’s capital Jerusalem. The long-awaited action represents a significant turning point for the city and the Jewish people.

All this excitement came 70 years to the day today after US President Harry Truman became the first world leader to recognize the modern state of Israel.

In a speech, President Trump emphasized kept promises and the promise of peace.

“Congratulations, it’s been a long time coming,” Trump said in a video played at the ceremony.

“This city and this entire nation is a testament to the unbreakable spirit of the Jewish people,” he said. “The United States will always be a great friend of Israel.”

The president went on to express his hope for peace in the region in the video message.

“We extend a hand in friendship to Israel, to Palestinians and to all of their neighbors. May there be peace. May God bless this embassy. May God bless all who serve there, and may God bless the United States of America,” Trump said.

Speakers at the ceremony noted how 12 U.S. presidents had made promises to move the embassy, with the move officially being mandated by law in 1995, but failed to fulfill their promises. Trump, they said, had the courage to do what those 12 presidents did not–acknowledge the reality that Israel has the right to declare Jerusalem its modern capital as it was in antiquity.

The Bible mentions Jerusalem and Zion almost 1,000 times, and Jerusalem has been the capital of the Jewish people for 3,000 years.

“This is the theme that’s in our spiritual DNA and therefore when the president of the United States moves the US Embassy to Jerusalem and recognizes Jerusalem as Israel’s capital, he is addressing something at the core of Jewish identity,” former Israeli Ambassador to the United Nations Dore Gold said.

President Trump is making history as he moves the embassy from Tel Aviv to Jerusalem.

The story starts thousands of years ago when King David captured Jerusalem and made it his capital. Four hundred years later, the Jewish people are expelled to Babylon for 70 years, then return to rebuild the Second Temple with the help of Persia’s King Cyrus.

Gold says Trump’s embassy move might even compare to that of the biblical king.

“That was a huge charitable act on his part, which is in our historical memory and the fact that now President Trump is going to move the US Embassy to Jerusalem puts him in a special category and perhaps even the category with the ancient King Cyrus of Persia,” he said.

Fast forward to 1967 and the Six-Day War when Israel reunites Jerusalem under its sovereignty. Then in 1980, Israel officially makes Jerusalem its capital and countries from all over the world move their embassies from the city in protest.

“The Christian Embassy was founded after 13 national embassies left Jerusalem and it provided a unique moment where the Jewish people were willing to accept our hand of friendship,” said David Parsons, with the International Christian Embassy Jerusalem. As a lawyer, he helped draft the Jerusalem Embassy Act, passed by Congress in 1995, mandating the embassy move to Jerusalem.

“Now, 22 years later after all these delays and waivers, it’s back to our order. Trump has recognized Jerusalem,” Parsons said. “The ambassador’s going to be working here, and then they’re going to start building the building so it’s a moment of personal vindication for me,” Parsons said.

It has been hailed as one of the greatest moments for modern day Israel. Municipalities, businesses and ordinary citizens are expressing their appreciation for the American president by naming everything form restaurant dishes to light rail and bus stations after him. This week, Jerusalem’s official soccer team permanently added the name “Trump” to their team’s name while Israeli’s have hung photos of Trump in their homes and American flags on their porches and high-rise balconies.

Tony Perkins and former Congresswoman Michele Bachmann serve on President Trump’s Evangelical Advisory Council. They both said the move is good for the US, other nations and Mideast peace.

“The scripture is pretty clear on that and that those who bless Israel will be blessed,” Perkins said.

“Israel’s enemies have always fought on the propaganda argument of words, the fact that Israel was illegitimate and had no right to this land,” Bachman said. “President Trump, excuse the pun, played a trump card. He’s taken the article off the table.  He said, look we aren’t even going to talk about this anymore – Jerusalem is or isn’t Israel’s, it is. We’re making a decision. It is.”

Gold says only in a united Jerusalem under Israeli sovereignty would those sites be protected.

President Trump’s decision effectively recognizes the western part of the city as Israel’s capital. Most holy sites are in the eastern sector.

“Well Jerusalem’s been the capital of the Jewish people, as I said, for 3,000 years. I don’t see that changing. I think as long as we have freedom of worship, freedom of access guaranteed, I think that many in the Arab world will acquiesce to the idea that Jerusalem remains the undivided capital of Israel,” he concluded.

The city of almost 900,000 people was in a celebratory mood today as tens of thousands filled the streets to celebrate while several protests by Palestinian Arabs were also visible.