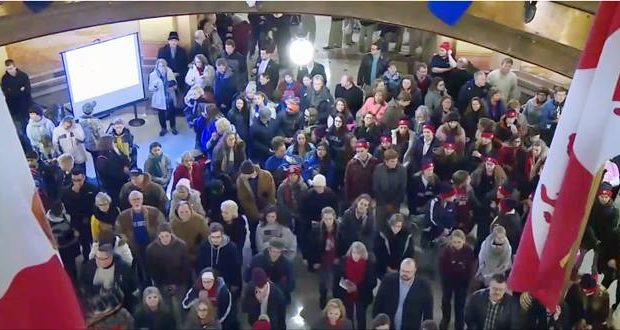 Wet weather didn’t stop hundreds of pro-life advocates from gathering Tuesday, January 22nd, at the Kansas Statehouse to mark the 46th anniversary of the U.S. Supreme Court’s Roe v. Wade decision that made abortion legal in the United States.

The crowd marched from the Topeka Performing Arts Center to the Capitol carrying signs saying “choose life” and “stop abortion now.” The Topeka Knights of Columbus led the marchers along the route. A spokesman for the organization said he saw abortion as the killing of innocent life, and the march was to raise awareness. 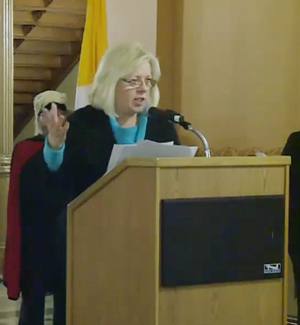 Kansans for Life, which organizes the rally and march every year, noted at least half a dozen Catholic schools brought students to participate.

“This is the 46th anniversary of the U.S. Supreme Court Roe V. Wade decision which took all the power away from the states to regulate abortion,” Mary Kay Culp, Executive Director of Kansans for Life, said.

LaTurner said abortion was the most important issue in Kansas.

One of the people who came to the rally was Senate President Susan Wagle.

“I was pro-choice in my youth, then I got married and became a mom, and I realized with my first pregnancy when that baby started to hiccup and kick, that that’s an infant, a child, an independent child, independent from my body and that child has the right to life,” Wagle said.

It wasn’t just lawmakers and adults. The rally attracted young people too, like teenagers Samantha Kopecky and Stacia Mendoza, who are just as passionate about the movement. 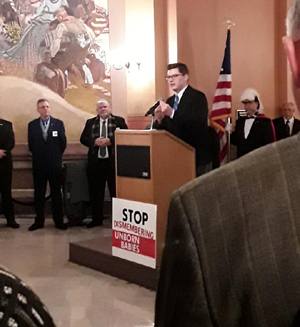 State Treasurer Jake LaTurner speaks to the crowd at the rally

“It’s important to realize everybody deserves to be here, whether that be the eldest of the eldest or someone in the womb,” Kopecky said.

“It wasn’t until 8th grade that I heard what actually happened during an abortion,” Mendoza said. “Once I heard that I couldn’t understand why anybody would think it was acceptable.”

No matter the age, all activists said they’re concerned about abortions in Kansas. Wagle said she and other legislators have worked to pass laws restricting abortions, but the state’s Supreme Court could undo that.

“The state Supreme Court could overrule some of the restrictions that have been placed in Kansas that are in line with Roe vs. Wade,” Wagle said, “There is concern amongst this crowd that the court might overturn some legislation that Kansas legislature has passed.”

She said if that happens, the state’s new Democratic Governor could further unravel their pro-life work.

“Certainly the Governor could use her ability, if the court overthrows our current restrictions,” Wagle said, “It will be very difficult to re-enact those restrictions with a Governor who’s pro-choice.”

Many are anxiously awaiting a State Supreme Court decision in a case challenging a 2015 law that bans an abortion procedure known as dismemberment, and are worried that the courts may overturn it.

“If it happens – and we think it will because we know who put those Supreme Court Justices there – we’re going to have to amend our Constitution,” Culp said.

Culp said she believes a constitutional amendment may pass.

“We picked up eight seats in this last election. We lost governorship, but we got a net gain of eight seats,” she added.

An amendment to the Kansas Constitution would require consent of two-thirds of the House and Senate before being placed on a statewide ballot. Constitutional amendments then require a simple majority among voters to pass.

“We want to do everything we can to protect human life from conception to natural death and part of that, of course, is educating the general population, educating the citizens of Kansas which we’ve been doing for decades,” said Jeanne Gawdun, senior lobbyist and event coordinator with Kansans for Life. 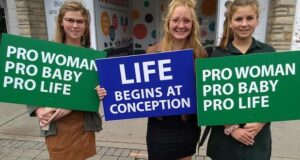 Another poll finds majority want most or all abortions banned