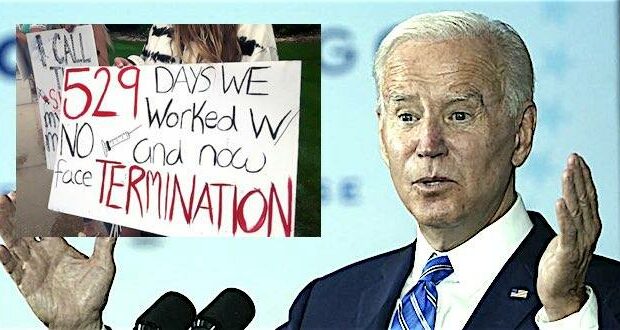 Legal experts are reacting to the Supreme Court ruling against the sweeping Biden vaccine mandate while allowing the mandate requiring health care workers.

The rulings came mid-afternoon on Jan. 13 and were offered as part of an emergency hearing. Missouri led the effort to block what was seen as unconstitutional mandates and was joined by an array of business groups, along with Ohio, Louisiana, and two dozen other states, asked for the federal mandates to be blocked.

The ruling allowing compulsory vaccination of health care workers is a “terrible” decision that is “going to result in people dying,” Robert Henneke of the Texas Public Policy Foundation stated.

The Supreme Court voted 6-3 to block the mandate issued by the Occupational Safety and Health Administration (OSHA), finding the challenge to it was likely to succeed. The rule forced employers with at least 100 employees –or most of the nation’s private workforce— to subject their employees to vaccinations aimed at preventing COVID-19 or to regular testing to detect it.

“Administrative agencies are creatures of statute” and “possess only the authority that Congress has provided,” the majority opinion states. “The Secretary has ordered 84 million Americans to either obtain a COVID–19 vaccine or undergo weekly medical testing at their own expense. This is no ‘everyday exercise of federal power.’ It is instead a significant encroachment into the lives—and health—of a vast number of employees.”

“Although COVID-19 is a risk that occurs in many workplaces, it is not an occupational hazard in most. COVID-19 can and does spread at home, in schools, during sporting events, and everywhere else that people gather,” the opinion continues.

In a press release, Concerned Women for America stated,
“Justice Gorsuch’s concurrence is extremely helpful because it acknowledges what most Americans understand. This administrative mandate is trying to accomplish what President Joe Biden could not get done through the people’s representatives. He is trying to enact something Congress up until now has rejected.
If the people want a vaccine mandate, they could easily demand it from Congress. The reality is most people do not. In fact, the President’s approval numbers have been steadily declining. The latest numbers show him at an all-time low of 33 percent. Fifty-five percent disapprove of his handling of the pandemic.
That is why President Biden had to work through OSHA to establish this national vaccine mandate. He lacks the necessary support to do it otherwise.”

All the Democratic appointees–Justices Stephen Breyer, Elena Kagan, and Sonia Sotomayor—would have allowed the mandate to go forward. Their dissenting opinion states that the court “seriously misapplies the applicable legal standards” and “stymies the Federal Government’s ability to counter the unparalleled threat that COVID–19 poses to our Nation’s workers.”

Henneke, who represented a coalition of Texas temporary staffing companies in the OSHA challenge, was pleased to win but wary of the reasoning adopted by the high court.

“Without the constitutional questions being taken on by the Supreme Court, we’ve won the battle today, but we still are left fighting the war,” he said.

“It’s the correct outcome but unfortunately the majority opinion misses the forest for the trees because it doesn’t address except in touching reference … the bigger constitutional issues or defects in the Biden administration’s claim of authority.”

“This ruling has an importance that extends beyond the confines of these cases and may have a lasting effect on the executive branch’s behavior.”

Burling said the court recognized the importance of the separation of powers, “where the legislature passes the laws, where the executive [enforces] those laws, and the judiciary is the traditional arbiter of whether the law is being followed.”

“This is a really important thing for our liberty, as James Madison pointed out in the Federalist Papers, when the Constitution was being debated, that when you have these parts of government together in one person, that’s the very definition of tyranny.”

Curt Levey, president of the Committee for Justice, said the ruling “was a victory for the Constitution because it reminded the administrative state that its job is to interpret statutes, not to expand them.” Levey said he was happy the decision “emphasizes separation of powers … if you know there’s going to be an OSHA that’s going to be in charge of vaccine mandates, that’s got to come from Congress, not from the executive branch.”

The Supreme Court voted 5-4 to lift lower court stays that had halted enforcement of the U.S. Department of Health and Human Services (HHS) emergency regulation, finding the government’s challenge to it would probably be successful. The rule, now in effect, requires more than 10 million employees at health care facilities that participate in the Medicare and Medicaid programs to be vaccinated against COVID-19.

The majority opinion states: “Congress did grant authority to the health secretary to promulgate” regulations he considers necessary to protect health and safety. Although a vaccination mandate is unprecedented, “we agree with the government that the Secretary’s rule falls within the authorities that Congress has conferred upon him,” they added.

Thomas wrote a dissenting opinion that was joined by Alito, Gorsuch, and Barrett.

The case is “only about whether [HHS] has the statutory authority to force health care workers, by coercing their employers, to undergo a medical procedure they do not want and cannot undo. Because the Government has not made a strong showing that Congress gave [HHS] that broad authority, I would deny the stays pending appeal,” the dissent states.

Levey said the HHS ruling was a closer call than the OSHA ruling.

“You can always make an argument about how somehow this is regulating occupational safety and Health, as the court said, where this is really about regulating public health, and that’s not within OSHA’s power.”

But with the HHS case, “it was a closer fit,” Levey said.

“Anyone listening to that argument would have said, ‘yeah, when I think of regulating health care facilities and health care workers, this seems like a natural fit, whereas the other was just commandeering employers to do something that really has no relationship to employment.”

But Henneke was critical of the HHS mandate ruling.

“I think it’s a terrible decision, and I’m fearful that it’s going to be immediately disastrous and disruptive to our healthcare industry, and it’s going to result in people dying.”

The ruling “gives far too much deference to a broad and vague reading of an ambiguous statute” related to HHS that the Biden administration claimed gave this authority to the federal government.