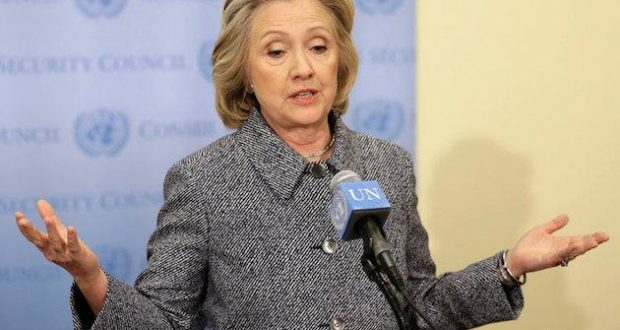 A Chinese-owned company operating in the Washington area hacked Hillary Clinton’s private servers throughout her term as secretary of state and obtained nearly all her emails, two sources briefed on the matter told The Daily Caller News Foundation.

The Chinese firm obtained Clinton’s emails in real time as she sent and received communications and documents through her personal server, according to the sources, who said the hacking was conducted as part of an intelligence operation.

The Chinese wrote code that was embedded in the server, which was kept in Clinton’s residence in upstate New York. The code generated an instant “courtesy copy” for nearly all of her emails and forwarded them to the Chinese company, according to the sources.

The Intelligence Community Inspector General (ICIG) found that virtually all of Clinton’s emails were sent to a “foreign entity,” Rep. Louie Gohmert, a Texas Republican, said at a July 12 House Committee on the Judiciary hearing. He did not reveal the entity’s identity, but said it was unrelated to Russia.

Two officials with the ICIG, investigator Frank Rucker and attorney Janette McMillan, met repeatedly with FBI officials to warn them of the Chinese intrusion, according to a former intelligence officer with expertise in cybersecurity issues, who was briefed on the matter. He spoke anonymously, as he was not authorized to publicly address the Chinese’s role with Clinton’s server.

Among those FBI officials was Peter Strzok, who was then the bureau’s top counterintelligence official. Strzok was fired this month following the discovery he sent anti-Trump texts to his mistress and co-worker, Lisa Page. Strzok didn’t act on the information the ICIG provided to him, according to Gohmert.

Gohmert mentioned in the Judiciary Committee hearing that ICIG officials told Strzok and three other top FBI officials that they found an “anomaly” on Clinton’s server.

The former intelligence officer who spoke with TheDCNF said the ICIG “discovered the anomaly pretty early in 2015.”

“When [the ICIG] did a very deep dive, they found in the actual metadata—the data which is at the header and footer of all the emails—that a copy, a ‘courtesy copy,’ was being sent to a third party and that third party was a known Chinese public company that was involved in collecting intelligence for China,” the former intelligence officer told TheDCNF.

“The [ICIG] believe that there was some level of phishing. But once they got into the server something was embedded,” he said. “The Chinese are notorious for embedding little surprises like this.”

The intelligence officer declined to name the Chinese company.

“We do know the name of the company. There are indications there are other ‘cutouts’ that were involved. I would be in a lot of trouble if I gave you the name,” he told TheDCNF.

A government staff official who’s been briefed on the ICIG’s findings told TheDCNF that the Chinese state-owned firm linked to the hacking operates in Washington’s northern Virginia suburbs. The source was not authorized to publicly discuss the matter.

The company that penetrated Clinton’s server was not a technology firm and it served as a “front group” for the Chinese government, the source told TheDCNF.

The Fairfax and Loudoun county governments told TheDCNF that 13 state-owned Chinese companies operate in the area. Of those, three were not technologically oriented.

Fairfax County Economic Development Authority communications manager Seth Livingston told TheDCNF that all of the nine firms operating in his county were there in 2009 when Clinton began as secretary of state.

“Our Asian folks believe that all of the companies have been around and known to us since that time period,” he said in an email.

“This is the most combed over subject in modern American political history,” Clinton spokesman Nick Merrill told TheDCNF. “The FBI spent thousands of hours investigating, and found no evidence of intrusion. That’s a fact.”

“But in an age where facts are alternative and truth isn’t truth, it’s no surprise that an outlet like the Daily Caller would try to distract us from very real and very immediate threats to our democracy brought by the man occupying the White House,” he continued.

“IC IG was involved in the classification review of certain information drawn from the private email server,” an agency spokeswoman told TheDCNF. She declined to comment further.

The two IGs asked the Department of Justice to investigate whether the classified information was compromised, according to a July 23, 2015, New York Times report based on unnamed senior government officials.

The FBI issued a referral to the Justice Department in July 2015. The bureau warned that classified information may have been disclosed to a foreign power or to one of its agents.

“FBIHQ, Counterespionage Section, is opening a full investigation based on specific articulated facts provided by an 811 referral from the Inspector General of the Intelligence Community, dated July 6, 2015 regarding the potential compromise of classified information,” a July 10, 2015, FBI memo stated.

“This investigation is also designated a Sensitive Investigative Matter (SIM) due to a connection to a current public official, political appointee or candidate,” the memo stated.

Then-FBI Deputy Director Mark F. Giuliano sent a follow-up memo on July 21, 2015, to President Barack Obama’s deputy attorney general, Sally Yates, about two conversations he had with her about the criminal referral.

“On 13 July 2015 and 20 July 2015, I verbally advised you of a Section 811(c) referral from the Inspector General of the Intelligence Community received by the FBI on 06 July 2015. The referral addressed the mishandling of classified information on the personal e-mail account and electronic media of a former high-level us Government official,” according to the FBI memo, which was hand delivered to Yates.

Former FBI Director James Comey acknowledged in his recent book, “A Higher Loyalty: Truth, Lies, and Leadership,” that the FBI was conducting a criminal investigation into Clinton’s conduct.

“Look, there’s evidence based on the complete lack of security hygiene on the server. Fourteen-year-old hackers from Canada could have probably hacked into her server and left very little trace,” Shaffer said. “Any sophisticated organization is going to be able to essentially get in and then clean up their presence.”

And a former consultant to the U.S. trade representative, Claude Barfield, told TheDCNF: “The Chinese were in the process of really gaining technological competence in 2009 to 2010. This begins to really take off in the early years of the Obama administration. The Obama administration was kind of late and there was this slow reaction about how sophisticated the Chinese were.”

Previous: Youngest face transplant recipient credits God with new life
Next: How to be a millionaire: Tips from the Dave Ramsey show