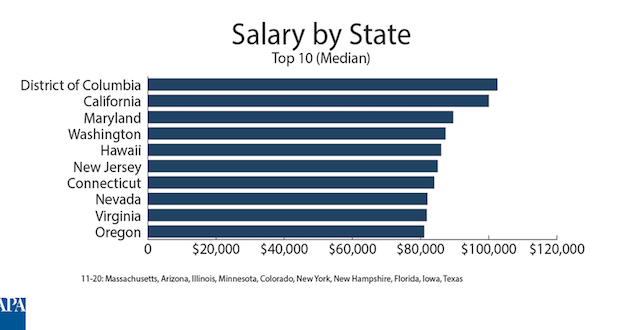 The Federal government, based in Washington D.C., has the highest salaries compared to all states.

The USDA recently caused a stir among career employees when it decided to move some of its operation from Washington, D.C., to Kansas City, Mo. Sen. Josh Hawley, a Missouri Republican, wants to continue the trend by relocating federal jobs.

Hawley introduced legislation this week that would move the majority of the federal bureaucracy out of Washington to economically depressed areas, according to National Review.

The “Helping Infrastructure Restore the Economy (HIRE) Act,” which is cosponsored by Sen. Marsha Blackburn, a Republican from Tennessee, would move 90 percent of the positions within 10 executive agencies to economically distressed regions that have a stake in the work of those respective agencies. The nation’s highest paying jobs are in Washington D.C.

Under the bill, the USDA would be relocated to Missouri while the Department of Education would move to Tennessee to disperse the economic benefits associated with relatively high-paying government jobs.

“Every year, Americans’ hard-earned tax dollars fund federal agencies that are mainly located in the D.C. bubble,” Hawley said in a statement. “That’s a big part of the problem with Washington: They’re too removed from the rest of America. The HIRE Act will move policymakers directly into the communities they serve, creating thousands of jobs for local communities and saving taxpayers billions of dollars along the way.”

The bill comes in the wake of Hawley’s online feud with USDA research analyst Andrew Crane-Droesch, who wrote an op-ed in the Washington Post arguing the agency moved its Economic Research Service to Kansas City to undermine its staff because their research didn’t support the administration’s policy goals.

“I assume this is a parody, right? DC bureaucrats aren’t actually saying out loud that moving to Missouri is … punishment, are they? Because surely nobody could be that condescending & elitist,” Hawley wrote on Twitter in response to the op-ed.

Previous: Missouri representative hopes to make it easier to become foster parents by speeding up training
Next: Northeast Kansas City church loses playground in fire after series of break-ins