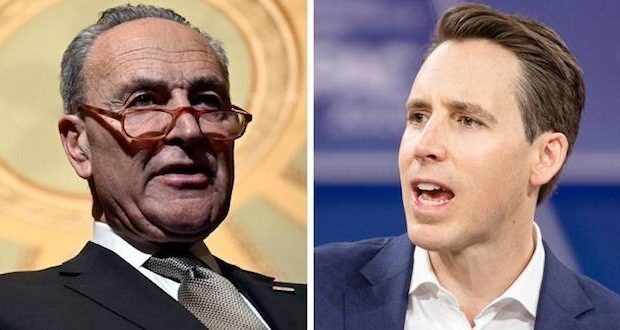 In a pro-abortion rally in front of the Supreme Court, Schumer threatened justices by name, saying, “I want to tell you, Gorsuch. I want to tell you, Kavanaugh. You have released the whirlwind, and you will pay the price. You won’t know what hit you if you go forward with these awful decisions.”

I would call on Schumer to apologize, but we all know he has no shame. So tomorrow I will introduce a motion to censure Schumer for his pathetic attempt at intimidation of #SupremeCourt

This is how Hawley responded on Twitter: “Now @chuckschumer is threatening Supreme Court Justices personally, to the point of implying their physical safety is endangered. Disgusting, shameful, and frankly, WEAK. I would call on Schumer to apologize, but we all know he has no shame. So tomorrow I will introduce a motion to censure Schumer for his pathetic attempt at intimidation of #SupremeCourt.”

Hawley was not alone in his criticism. Jimmy Williams, a senior adviser to Democrat Tom Steyer’s failed presidential campaign, responded to Schumer’s threat by suggesting that Schumer may need to step down.

“Threatening a sitting Justice regardless of their politics is dangerous,” Williams tweeted. “What Schumer said is gross, inappropriate and unacceptable. He should clarify his words immediately or step down from leadership. We must be better than this.”

Leftist law professor Lawrence Tribe also hit Schumer, writing on Twitter, “These remarks by @SenSchumer were inexcusable. Chief Justice Roberts was right to call him on his comments. I hope the senator, whom I’ve long admired and consider a friend, apologizes and takes back his implicit threat. It’s beneath him and his office.”

As Chief Justice John Roberts commented, “Justices know that criticism comes with the territory, but threatening statements of this sort from the highest levels of government are not only inappropriate, they are dangerous. All members of the court will continue to do their job, without fear or favor, from whatever quarter.”

In a rare act, Schumer has been forced to apologize for his startling comments. Even liberal court watchers criticized Schumer saying he threatened the independence of the courts and the Constitution.