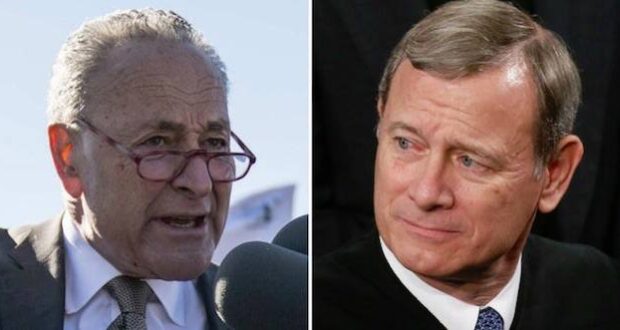 At a pro-choice rally Wednesday morning, Senate Minority Leader Chuck Schumer (D-NY) threatened two Supreme Court justices for agreeing to consider a Louisiana abortion case. “I want to tell you, Gorsuch, I want to tell you Kavanaugh: You have unleashed a whirlwind, and you will pay the price,” Schumer threatened. “You won’t know what hit you!”

The Supreme heard had just hear arguments Wednesday on the case that would require Louisiana abortion doctors to have admitting privileges at a local hospital. But the news that stole headlines was the stunning reaction from the Democrats’ top leader in the Senate.

Roberts jumped to his colleagues’ defense criticizing Schumer’s comments as “inappropriate” and “dangerous.”

“Justices know that criticism comes with the territory, but threatening statements of this sort from the highest levels of government are not only inappropriate, they are dangerous,” Roberts said in a statement.

Chief Justice Roberts was supported by judicial scholars in his protection of the court’s justices.

Despite Schumer’s threatening language, the case isn’t exactly about overturning abortion. Supporters say the law is about ensuring the safety of women who are having abortions.

But since Roe v Wade, the Supreme Court has consistently ruled states can’t put an undue burden on women getting an abortion. Pro-choice opponents of the Louisiana law argue that’s exactly what it does.

Sen. Marsha Blackburn (R-TN) disagrees saying, “It is a nonsensical statement. You want physicians and health care providers to have to meet a given standard. And they do this in every area except when it comes to abortions and women’s health. They’re saying ‘no no no no no.'” Blackburn and 206 other pro-life lawmakers on Capitol Hill have asked the court to uphold the Louisiana law.

Angie Thomas of Louisiana Right to Life added, “In Louisiana, all other outpatient surgery center physicians are required to have admitting privileges except for abortion providers.”

Her organization helped shape state law. She stated, “It’s very important that we hold those abortion doctors up to the same standard as every other doctor.”

Abortion providers have said t’s not really necessary for their doctors to have admitting privileges at a local hospital because there just aren’t that many emergencies involving abortions.

“This is not about the frequency of times women have to go to the emergency room,” Thomas shot back. “It’s about safety and protection of women if and when that does occur. When women make that difficult decision to have an abortion, they’re not making a decision to go in for substandard medical care.”

Blackburn added, “Let’s make certain that a process is in place so that these women have all the information they need and doctors have admitting privileges just in case something goes wrong.”

Thomas warned the lack of admitting privileges can be a real problem.

“We’ve heard testimony from ER doctors explaining how difficult it is to assess women when they come in with a perforated uterus or hemorrhaging or an incomplete abortion, and they have no idea what happened before those women come in,” she explained.

“There are pages and pages of violations over the last decade in the record of this particular case,” Thomas shared. “All three abortion clinics in Louisiana have numerous violations…chronic violations…year after year.  And so that showed a real need for this type of legislation.”

As for the big picture, pro-choice types worry if the court starts cracking down on abortionists it could crack open the door to eventually wiping out Roe v Wade and legal abortion. Blackburn would love that.