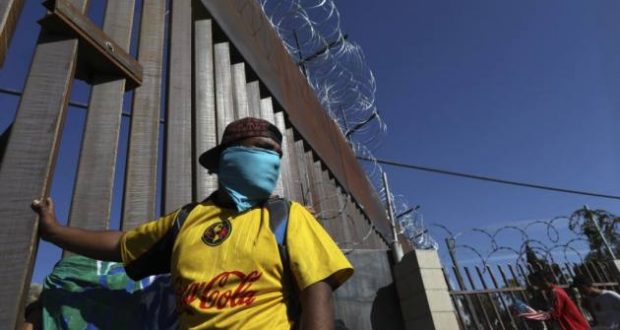 US border agents say 90% of the migrants who have reached the border are adult males, not women and children.

Trump may declare national emergency in address on TV tonight

WASHINGTON—President Donald Trump could declare a national emergency when he addresses the nation in a broadcast at 9 p.m. EST on Tuesday, Jan. 8. It will be the President’s first such TV address from the Oval Office.

The President has hinted at the possibility of using emergency powers to get funding for the border wall if the deadlock with Congress isn’t broken.

Additionally, the president has scheduled a visit to the southwest border on Jan. 10, White House press secretary Sarah Sanders confirmed on Jan. 7.

“[Trump] will travel to the Southern border on Thursday to meet with those on the front lines of the national security and humanitarian crisis,” Sanders wrote in a tweet on Jan. 7. “More details will be announced soon.”

Although no trip details are available yet, Trump had said that he would travel to Texas in January for the groundbreaking of a new 115-mile portion of border barrier that he announced had been contracted on Dec. 25.

The president last visited the border in March 2018 to view border wall prototypes. He also visited Yuma in 2017, where a border fence helped cut illegal border crossings by 95 percent.

In fiscal year 2018, almost 400,000 aliens were apprehended by Border Patrol after crossing the Southwest border illegally.

Trump’s determination to secure funding for the border wall and the refusal by Democrats led to the partial government shutdown in mid-December.

Negotiations have made little progress, and there’s no end in sight.

Trump said he will only sign a spending bill that includes $5.6 billion for the wall. The lame duck House passed legislation that included wall funding and would have reopened the government, but Minority Leader Sen. Chuck Schumer (D-N.Y.) said no Democrats would vote for it, so Majority Leader Sen. Mitch McConnell (R-Ky.) declined to bring it to a vote.

House Armed Services Committee Chairman Rep. Adam Smith (D-Wash.) confirms that Trump has the authority to call a national emergency on the grounds of border security.

Trump reacted to Smith on Jan. 7, writing on Twitter, “No doubt, but let’s get our deal done in Congress!”

Trump said that Vice President Mike Pence and other negotiators representing the administration had a productive meeting with those representing Schumer and House Speaker Nancy Pelosi (D-Calif.) on Jan. 6.

A number of law enforcement experts support a wall to help cut down on illegal immigration, drug trafficking, and human trafficking which is stretching their resources, endangering their staff and making travel in southern areas of border states unsafe for Americans. In some instances areas have become “no go” zones for Americans because of the danger from drug gangs and traffickers. It’s a crisis level contend those that  support the wall and America needs to take back the sovereignty of its territory they contend.

National Border Patrol Council President Brandon Judd told reporters on Jan. 3 that “anywhere that you look where we have built walls, they have worked.”

“I’ve been a Border Patrol agent for 21 years. I can personally tell you, from the work that I have done on the southwest border, that physical barriers, that walls actually work,” he said. “They have been an absolute necessity for Border Patrol agents in securing the border.”

Currently, around 654 miles of barrier exist along the almost-2,000 miles of U.S.–Mexico border.

Customs and Border Protection constructed around 31 miles of new and replacement fencing in 2018, with the final nine miles expected to be complete early this year, according to the Department of Homeland Security.

The following is the breakdown of miles for the 2018 projects:

The Case for a Wall

Trump made the case for a border wall in a Jan. 4 letter that was hand-delivered to all members of Congress. He attached a presentation that Homeland Security Secretary Kirstjen Nielsen had planned to deliver during a meeting with congressional leadership the day before, but was cut off by the Democratic side.

The letter highlighted the main areas of the crisis along the border: drugs, criminal gangs, terrorists, and vulnerable populations.

The amount of drugs seized along the border dramatically increased between 2017 and 2018, with fentanyl seizures increasing by 73 percent, methamphetamine increasing by 38 percent, and heroin increasing by 22 percent. In 2018 alone, 1.7 million pounds of narcotics were seized by Customs and Border Protection, according to the congressional briefing. Although most drugs are seized within vehicles entering through official ports of entry, many more come in between the ports.

Meanwhile, 6,000 gang members, including those from the violent MS-13 gang, were apprehended at the southern border.

Vulnerable populations also increased and overwhelmed resources at the border, especially between ports of entry. In 2018, 60,000 unaccompanied children were apprehended by Border Patrol, an increase of 25 percent from the year before. Driving the increase however, was family units from Central America, about 161,000 were apprehended in 2018, an increase of 50 percent.

In the last five years, asylum claims increased by 2,000 percent, completely clogging the immigration court system. Of the thousands of Central Americans who claim asylum, only 9 percent end up being granted approval by an immigration judge. Immigration courts now have a backlog of almost 800,000 cases awaiting adjudication.

Less than a decade ago, most illegal border-crossers were single adult males from Mexico.

The migrant caravans that dominated much of the media headlines later in 2018, came about as a culmination of border security gaps, asylum loopholes, and wretched conditions in home countries.