Home / Faith / Should DC Comics portray Jesus as a superhero? 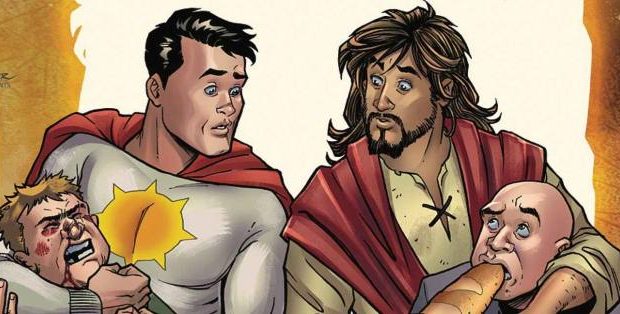 Should DC Comics portray Jesus as a superhero?

DC Comics has a new superhero and His name is Jesus.

DC Vertigo will star Christ Himself in an upcoming comic series called Second Coming, which features Jesus returning to earth on a mission to “set the gospel straight,” the plot summary reads. The series, written by Mark Russell and illustrated by Richard Pace, will debut in March 2019.

But Second Coming is closer to blasphemous than biblical. Instead of a biblical account of Christ’s return, it depicts Jesus as a failure who disappointed God by getting crucified when he first walked the earth. He is sent back to learn how to be a real Messiah by learning from the superhero “Sun-Man.”

“An all-powerful superhero, named Sun-Man, has to share a two bedroom apartment with Jesus Christ. The conceit is that God was so upset with Jesus’s performance the first time he came to Earth, since he was arrested so soon and crucified shortly after, that he has kept him locked-up since then,” Mark Russell said in an interview with Bleeding Cool.

Jesus is not omniscient in this series, but is totally clueless about what has happened on earth since he left.

“God was so upset with the fact that he got crucified last time that he wouldn’t even let him look through the celestial keyhole at earth to keep up,” said Russell in the Bleeding Cool interview. “He doesn’t know how sideways things have gone until he’s come down to Earth and sees it himself.”

When Jesus returns, He is shocked at how Christians have misinterpreted the gospel, Russell explains.

” [Second Coming] is about Jesus coming down and being appalled by what he sees has been done in his name by Christianity in the last two thousand years. He goes by a megachurch and they have a billboard of this Tom Brady-looking Jesus Christ throwing a football and he doesn’t even recognize himself which is a metaphor for him not recognizing what’s been done with the religion that bears his name,” he said the Bleeding Cool interview.

The series depicts Jesus “setting the gospel straight” by teaching Christians who He really is – an identity that Russell never fully explains himself in the interview.

Russell believes Christianity’s got it all wrong.

“The Christian religion doesn’t really base itself on what he taught, particularly in the modern Evangelical megachurches. They have him more as a mascot on t-shirts to prove they’re on the winning team,” he said.

The series is expected to have six issues.