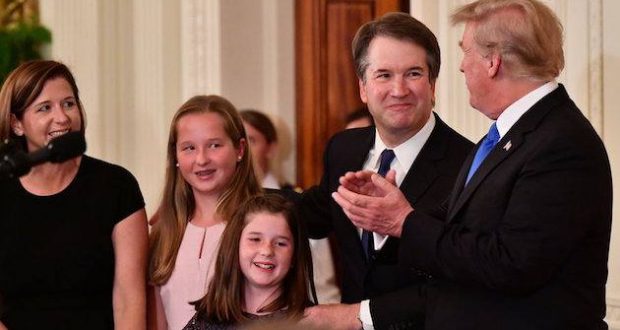 In a nationally televised address, Brett Kavanaugh was introduced to the nation as the nominee to replace retiring Supreme Court Associate Justice Anthony Kennedy.

Kavanaugh was described as “a judge’s judge” by President Trump as he cited his “proven commitment to equal justice under the law.”

Kavanaugh’s nomination was met overall with cheers from conservatives but it wasn’t unanimous as news outlets like ABC News attacked the judge as an extremist even before the choice was made public. Liberal democrats including failed presidential candidate Bernie Sanders, stood on the Capitol steps with protesters shrilly denouncing the choice.

But most conservatives applauded the decision as another example of Trump, for all his faults, staying true to his election promises and pro-life views.

“When the Senate confirms Judge Kavanaugh to the Supreme Court the American people will have another great justice, as he has already shown to be an independent, fair-minded judge who will honor the Constitution and the rule of law. Once again, President Trump has shown how seriously he takes his responsibility to put the best judges on America’s courts,” said Gayle Trotter, attorney, and spokesperson for Judicial Crisis Network said in a statement.

Penny Nance, president and CEO of Concerned Women for America, said in a statement, “Judge Brett Kavanaugh is abundantly qualified to sit on the bench of the United States Supreme Court. He is among the best and brightest jurists on the appellate courts with a reputation of being fair and impartial in his decisions. Judge Kavanaugh is known as a judge who respects the Constitution as written, refusing to legislate from the bench.”

“Evangelicals are ecstatic because in less than two years President Trump has filled a second Supreme Court vacancy with a second conservative — just as he promised.

The fact that the president chose another conservative justice is more important than the name of that justice. This is a huge win for President Trump,” Dr. Robert Jeffress, Senior Pastor of First Baptist Church of Dallas, said in a statement.

Rev. Samuel Rodriguez, president of the National Hispanic Christian Leadership Conference, said in a statement, “I join millions of Americans in congratulating Judge Kavanaugh for his nomination, a well-respected jurist widely regarded for his/her intellect, temperament, as well as for his/her dedication to the Constitution. While certainly conservative, Judge Kavanaugh is well within the mainstream of American legal thought and theory.

The American Family Association didn’t agree with other conservative groups and is telling its supporters to contact their senators to oppose Kavanaugh’s nomination.

“Judge Kavanaugh’s reasoning on religious liberty, Obamacare, and issues concerning life have proven to be of major concern,” said AFA President Tim Wildmon. “For these and other reasons, we are calling on citizens to urge their senators to firmly oppose the nomination of Brett Kavanaugh as a Justice on the United States Supreme Court.”

Meanwhile, the Senate’s top Democrat wasted no time in sharing his displeasure at Trump’s choice to replace Justice Kennedy.

According to The Associated Press, Sen. Chuck Schumer (D- NY) says by picking Kavanaugh, Trump is delivering on his pledge to “punish” women for their choices, putting abortion rights and health care protections for women “on the judicial chopping block.”

He says he will fight the nomination “with everything I have.” He’s urging people to make their voices heard, an indirect reference to voicing their objections to senators.

Schumer says if Kavanaugh is confirmed, “women’s reproductive rights would be in the hands of five men on the Supreme Court.”

Schumer and other Democrats have cited campaign statements Trump made to assert that any of the candidates Trump mulled would oppose abortion rights and the Obama-era health care law.

Kavanaugh is Trump’s second nominee to the high court since he took office in January 2017.

Before announcing his choice, Trump paused a moment to thank Kennedy for a lifetime of service. He also recognized Justice Antonin Scalia’s wife Maureen, and Edwin Meese, President Reagan’s attorney general, who was also in attendance.

“In keeping with President Reagan’s legacy, I do not ask about a nominee’s personal opinions. What matters is not a judge’s political views but whether they can set aside those views to do what the law and Constitution require,” Trump said.

Kavanaugh expressed his gratitude and said he was humbled by the president’s confidence in him. He also praised Kennedy.

“Thirty years ago, President Reagan nominated Anthony Kennedy to the Supreme Court. The framers established that the Constitution is designed to secure the blessings of liberty.  Justice Kennedy devoted his career to securing liberty. I am deeply honored to be nominated to fill his seat on the Supreme Court,” Kavanaugh said in his first public statement as a nominee.

Kavanaugh, 53, currently serves as a judge on the DC Circuit Court of Appeals. He is a longtime judge and former clerk for Justice Anthony Kennedy. Some conservatives have questioned his commitment to social issues like abortion.

Judge Kavanaugh has served as a judge on the US Court of Appeals for the District of Columbia Circuit since 2006, authoring more than 300 opinions, including 11 that have been affirmed by the Supreme Court.

Kavanaugh served under President George W. Bush which is partly why some have labeled him as more of an establishment choice. Plus, he is a former law clerk to Kennedy, who switched sides quite a bit during his time on the Supreme Court.

But his supporters note his experience and a wide range of legal opinions.

Born in Maryland, he is the son of two lawyers and attended Yale University and Yale Law School.

Kavanaugh and his wife Ashley have two daughters.

Previous: Rescue Complete. All boys leave cave alive
Next: Church elder steals up to $750,000 then may have torched building