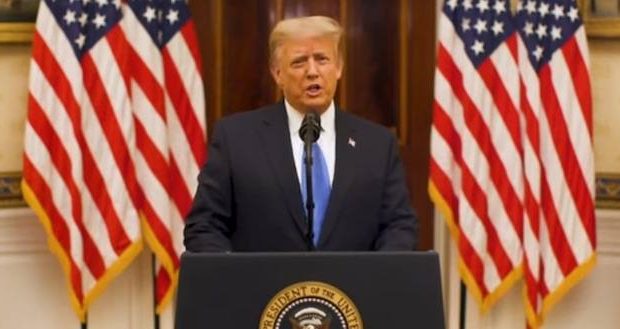 Trump to wait until after midterms on 2024 plans

Former President Donald Trump continues to drop hints about running for his old job in 2024. The news comes as President Joe Biden’s approval drops to 38 percent and Kamala Harris polling as the most unpopular Vice President in modern history.

“I am certainly thinking about it, and we’ll see,” he told Fox News. “I think a lot of people will be very happy, frankly, with the decision and probably will announce that after the midterms. It doesn’t mean I will,” he said of whether he will stick to that timeline. It’s probably appropriate, but a lot of people are waiting for that decision to be made.”

The former president said that “a lot of great people who are thinking about running are waiting for that decision because they’re not going to run if I run. We have a lot, they’re all very well named. But almost all of them said if I run, they’ll never run. And that’s nice, primarily because it shows a great degree of loyalty and respect.”

As for a potential running mate, Trump said there are “a lot of great people in the Republican Party.”

When asked whether he would consider Florida Gov. Ron DeSantis, Trump said, “He’s a good man, but we have a lot of great people. He’s been good.” Addressing whether he would consider former ambassador to the United Nations Nikki Haley, the former president said that she “every once in a while goes off the rails, and she comes back, which is nice.”

“She said she’d never run if I ran, which I think is a good sign of respect,” Trump said. “I was very good to her, I thought she did a very good job at what she did with the United Nations. She did an excellent job. But we have, there are so many people that are really good that would be great for that. So, you know, it’s very early to be talking about it.”

As for the former President, he’s lost at least 30 pounds as of September say some. Rack it up to a healthier diet and frequent golfing paying off, Business Insider reports.