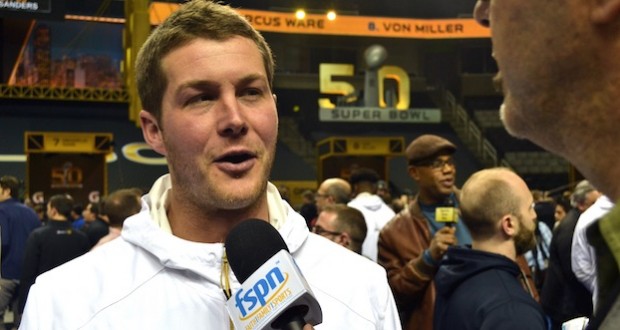 Denver Bronco Britton Colquitt talks to reporters at the SAP Center in San Jose, Calif., Feb. 1 about his Christian faith. The punter captured attention earlier this week after news broke that he would need to pay $1,800 for his newborn daughter to attend the Super Bowl. Photo by Shawn Hendricks/BP

After having to pay $1,800 for his newborn daughter to be able to attend Super Bowl 50, Bronco punter Britton Colquitt is quick to point out that all things work together for the good of those who love God.

Colquitt captured attention earlier this week after news broke that he would need to pay for his newborn daughter to attend the Super Bowl. While each player is allotted 15 tickets, they are required to pay a $1,800 fee for each one. And that fee apparently includes newborns.

“There’s no age limit to tickets,” Colquitt told the Denver Post. “It’s $1,800 for our week-old daughter we just had. It’s kind of crazy. [The baby] won’t remember, but I’m paying for it…. It’s about the medal I guess and the memories and putting your name in history forever.”

Despite the hefty ticket price, Colquitt seemed to be all smiles during Super Bowl 50’s Opening Night media event at the SAP Center in San Jose, Calif., Feb. 1. When asked to pick a verse that was special to him, Colquitt pointed to Romans 8:28: “We know that all things work together for the good of those who love God: those who are called according to His purpose.”

“God causes all good things to happen,” the former University of Tennessee Volunteer told reporters. Though challenges fall upon both nonbelievers and Christians, Colquitt noted, “He wants what is best for us.”

Whether Denver wins or loses on Sunday, Colquitt said he’s thankful for a second chance to win the big game with the Broncos after losing to the Seahawks 43-8 in 2014.

Amid all of this year’s Super Bowl hype, Colquitt added, his faith keeps him grounded.

“I know that winning or Super Bowl rings doesn’t make you happy,” he said. “You want to win it, but you know it’s not going to fulfill you because you can’t be fulfilled in this life — period. So it makes it easy in that aspect to just honor God.”

Colquitt, who signed with the Broncos in 2009, said “at the end of the day it’s you and God. And that’s who we are going to be answering to.”

As a punter, Colquitt is known for his exceptional ability to put the ball where he wants it, but he accepts the fact that Broncos fans would rather see their team score points than see them punt the ball away. But if the Broncos offense plays well, Colquitt won’t mind staying on the sideline with his entire family –- including his youngest child — there watching.

Colquitt is not the first NFL punter in his family. His father, Craig, won two Super Bowl rings with the Pittsburgh Steelers and his older brother, Dustin, punts for the Kansas City Chiefs.

“I’m just blessed that [God’s] given me this platform,” Colquitt said. “Man, there are a lot of other jobs that I could have and He’s really blessed me. And I don’t deserve to be here more than anybody else. Just very thankful.”

Kickoff for the Super Bowl, Sunday, Feb. 7, is slated for 6:30 p.m. Eastern from Levi’s Stadium in Santa Clara, Calif. The game will be telecast on CBS.