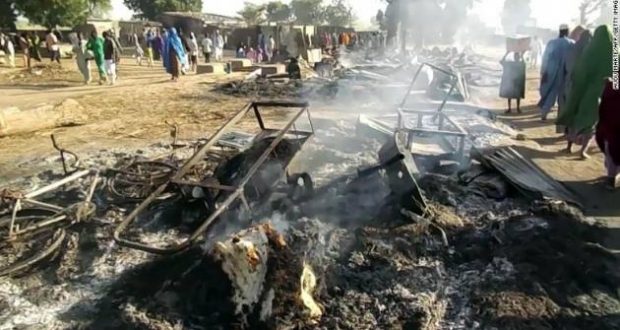 Over 65 Christians returning from a funeral in Nigeria have been slaughtered by Muslim extremists over the weekend.

Nigerian state television is reporting it is one of the deadliest attacks on civilians in recent months.

Local government chairman Mohammed Bulama was quoted as saying on state television that the terrorists killed the mourners after the funeral on Saturday.

Others were injured, he said, meaning the death toll may rise.

The growing murder of Nigeria’s Christians has become a national issue with some Muslim government officials denying it is happening. In a rare counter to the attacks, President Muhammad Buhari on Sunday condemned the attack and directed the military to hunt down the perpetrators, a statement from the presidential office said.

Borno state is the epicenter of the Boko Haram and ISWA insurgency. The conflict has lasted a decade, during which time the terrorists have killed thousands and millions have fled from their homes in the region. Human rights groups say the murder and displacement of Christian citizens is at genocide levels.

Resident Bakura Mallam Amadu said he saw the terrorists gather before firing on the funeral attendees. A security source said Islamists attacked on motorbikes and in vans.

Buhari won a second term in February promising to improve security in Nigeria.

Nigeria’s government says Boko Haram and ISWA have been largely defeated and driven out of territory they once held, but they continue to attack both civilian and military targets with Christians being the primary target.

The Trump administration recently hosted Nigerians in the White House who shared stories of the genocide and Vice President Mike Pence has been tasked with finding a solution to protect the country’s Christians along with religious minorities around the world.