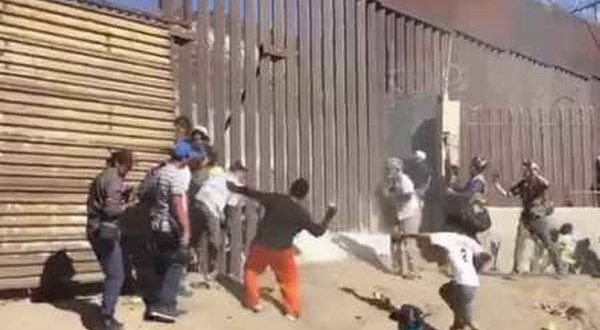 Shortly after overseeing the signing of a historic “safe third country” asylum agreement with Guatemala at the Oval Office on July 26, President Donald Trump told reporters that he expects to soon sign similar deals with Honduras and El Salvador.

The agreement basically forces the Central American countries to uphold the international agreement they are signatories to that sets guidelines for handling asylum seekers. Contrary to Democrat and media assertions, those guidelines were initiated by the U.N. and state that asylum seekers must stay in the country they immediately fled to, before seeking asylum in a third, fourth or fifth country like the United States.

Prior to the pact with Guatemala, Trump had already secured help from Mexico to tackle the migration crisis. In both cases, the president used the threat of tariffs to compel the two nations to cooperate, suggesting that the option of a tariff threat is on the table in dealing with Honduras and El Salvador as well.

“We have other great countries that are going to be signing up also,” Trump said.

Asked later if he expected to reach similar agreements with Honduras and El Salvador, Trump replied, “I do indeed.”

Migrants from Guatemala, Mexico, El Salvador, and Honduras account for 74 percent of the cases in U.S. immigration courts. In addition to their nationals who continue to pour into the United States, these countries serve as the major transit corridor for migrants from more than 200 other nations traveling en route to the United States.

As a result, cooperation from the four nations is crucial to stemming the flow of migrants to the U.S. southern border, especially at a time when Democrats in Congress continue to refuse to work with the Trump administration on legislation to patch up the loopholes in the U.S. immigration system. The president said the deals with Honduras and El Salvador may come “pretty soon,” suggesting that his international diplomacy may end up addressing a crisis largely perceived as a domestic issue under the purview of Congress.

The agreement with Guatemala requires migrants from Honduras and El Salvador to file their asylum claims and await the decisions in their cases in Guatemala; those who fail to do so will be sent back to Mexico once they are apprehended on the U.S.-Mexico border. While details of the implementation are unclear, the deal can technically prevent the vast majority of migrants from Honduras and El Salvador from traveling to and remaining in the United States. Migrants from El Salvador and Honduras constitute more than a third of the total claims in U.S. immigration courts.

Trump called the deal with Guatemala “historic” and said it would be “terrific” for both countries. The president noted that the deal will pave the way for investment in Guatemala and the expansion of the farm workers visa program.

“Today, we’re sending a clear message to human smugglers and traffickers that your day is over.  And we’re investing in the future of Guatemala, the safety of migrants, and their families,” Trump said. “We’ll protect the rights of those with legitimate claims, and we’ll end the widespread abuse of the system and the crippling crisis on our border.”

Guatemala briefly walked away from the deal earlier this month, and Trump responded with a threat of levying tariffs, raising fees on remittance payments, or imposing a travel ban. With any one of the measures posing the threat of crippling its economy, Guatemala signed the deal days later.

While it’s too soon to tell what effect the deal with Guatemala will have, the assistance that Mexico is providing is already having a substantial impact on the flow of migrants. According to McAleenan, apprehensions on the southwest border dropped by 28 percent in June and 22 percent in July, following Mexico’s commitment to use its National Guard to intercept and deter migrants traversing its territory.

The Trump administration also recently expanded the Migrant Protection Protocol (MPP) policy to cover the entire length of the border. Under the MPP, which requires cooperation from Mexico, some migrants who seek to enter the United States are sent back to Mexico to await the resolution of their cases.

Mexico’s government said July 27 it would help Honduras create 20,000 jobs this year and support its coffee farmers, as the two countries seek to curb migration to the United States. Mexican President Andrés Manuel López Obrador and his Honduran counterpart, Juan Orlando Hernández, pledged to work together to lift prosperity in Central America, where poverty and violence have fueled the northward exodus of people.

Similar to Guatemala, Mexico sealed the cooperation deal with the United States after Trump threatened to impose increasingly crippling tariffs on Mexican goods. Earlier in his presidency, Trump imposed tariffs on some of America’s biggest allies and adversaries, despite opposition at home and abroad. These measures against China, Canada, and the European Union are now a factor for any leader contemplating whether Trump is bluffing when he threatens to impose tariffs.

In Guatemala’s case, the United States negotiated for months before Trump used the threat of tariffs to push the deal over the finish line.

“This is a very big day,” he said. “We have long been working with Guatemala and now we can do it the right way.”

In response to some of his domestic critics, Guatemalan President Jimmy Morales said on social media that the deal evades “drastic sanctions … many of them designed to strongly punish our economy, such as taxes on remittances that our brothers send daily, as well as the imposition of tariffs on our export goods and migratory restrictions.”