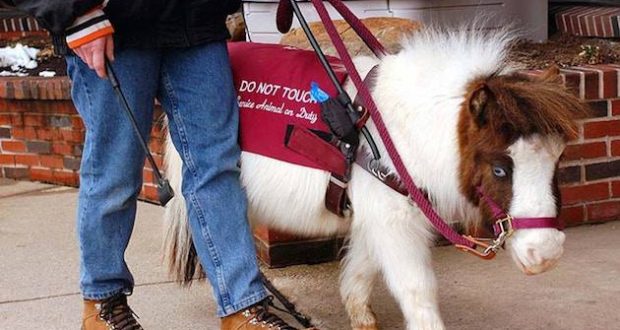 Could a horse be sitting next to you on a plane next month? Yes.

A horse may be your next seat mate on Southwest Airlines

During a time when most businesses are cracking down on the increasing abuse of obtaining unorthodox “service” or emotional support animals and taking them on planes or in restaurants, one airline is encouraging the practice. Beginning September 17, people will be able to walk a horse onboard Southwest flights, according to the airline.

Officials announced the policy change on its website on Tuesday. In the statement, officials name miniature horses, along with dogs and cats, as some of the most common service animals that will be accepted onboard. Passengers will only need to provide a credible verbal assurance that the animal is a trained service animal. The key word is “verbal.” No documentation or letter from a doctor is required.

In addition, the company announced other changes, such as formally accepting Psychiatric Support Animals (PSAs) as trained service animals, after accepting them informally as such in the past, and will also limit each passenger to one Emotional Support Animal.

Passengers with an ESA will, according to the statement, still need to present a complete, current letter from a medical doctor or licensed mental health professional on the day of departure.

Southwest’s updated rules come after several airlines made headlines this year when customers attempted to bring unorthodox service animals on flights. One woman flushed her dwarf hamster down an airport toilet after she said a Spirit Airlines representative would not allow her to board with the rodent. Another woman was barred from boarding a United Airlines flight with her emotional support peacock.

All service and support animals traveling aboard Southwest planes must be well behaved and under the control of their handler throughout the flight. The policy sounds good but how can an owner give assurances for a flight that has not yet taken place?

Passenger safety groups as well as airline unions have not had an opportunity to respond to the safety hazards posed. Some are asking how a terrified horse would respond in the smoke and chaos of a burning plane as flight attendants attempted to safely disembarking 200 passengers.

In addition to safety concerns, critics are also questioning sanitation issues. While the these horses may be miniature, their, uh, byproducts typically are not.

Previous: Interview with God movie: What would you ask?
Next: Chicago Christians pray and work to stop violence