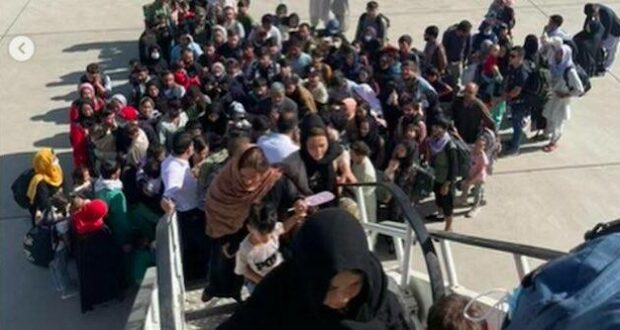 While we slept, @thenazarenefund was hard at work boarding our second group of #afghanistan #refugees #christian women and children, families that no longer have to fear for their life because of who they are or what they believe. Photo: Glenn Beck.

International Christian Concern, which monitors persecution around the world, is pleading with Christians to pray for Afghan believers.  They face persecution and death in the face of the Taliban’s takeover of the country after a disastrous U.S. withdrawal.

The plea comes as the Taliban is already reported to be going door-to-door searching for Christian converts. One unidentified Christian told a Western news outlet that they were being “hunted like animals.”

The terrorist group is carrying out a highly organized manhunt for Christians and others people on their wanted list, according to the head of a nonprofit providing intelligence to the United Nations.

“They have lists of individuals and even within the very first hours of moving into Kabul they began a search of former government employees—especially in intelligence services and the special forces units,” Christian Nellemann, head of the Norwegian Centre for Global Analyses, told the BBC Thursday.

The RHIPTO Norwegian Centre for Global Analyses is a nonprofit that undertakes analytical, assessment, training, and other forms of support for the U.N.

Nellemann said the Taliban have a “more advanced intelligence system” when moving into all major Afghan cities, including the capital of Kabul.

That not only could lead to mass executions but also a mass reveal of the intelligence networks that the West has provided Afghanistan.

“So this could undermine severely a number of our Western intelligence services,” Nellemann added.

The alleged move is contrary to recent statements of the Taliban. The group announced “complete amnesty” to Afghans on Tuesday.

It is unknown how many Christians live in Afghanistan, although some estimates put the number between 10,000 and 12,000. Most of them are converts from Islam – a fact that makes them targets for persecution by the Taliban. Under Taliban ideology, the punishment for conversion to Christianity is death. “We encourage you to pray that Christians would not be overcome by fear,” the organization said.

“Every Muslim-background believer like myself that converted to Christianity, he knows the consequences of their conversion,” that Christian said. “Islam is very clear. Quran is very clear, Hadith is very clear for the apostasy. They give three days after that, if they don’t repent … there is no mercy on those people.”

Even before Joe Biden announced its withdrawal, Afghanistan was a dangerous place for Christians, with Open Doors ranking it No. 2 on its world watch list ranking of nations where believers face the most persecution. When the list was released, the Taliban controlled only certain parts of the country. Now, though, the Taliban controls the entire nation.

“Please pray for the Christians in Afghanistan who have been obeying Christ’s Great Commission out of love for the lost people in Afghanistan,” tweeted Bryant Wright, president of SEND Relief of the Southern Baptist Convention. “It doesn’t sound like our government has remembered them. Let’s at least pray for their strength and courage as they give their lives for Jesus!”

Previous: Mary’s Wedding – hope, healing, and the joy of love set against war
Next: Sen. Josh Hawley one of many of legislators calling on Biden to resign