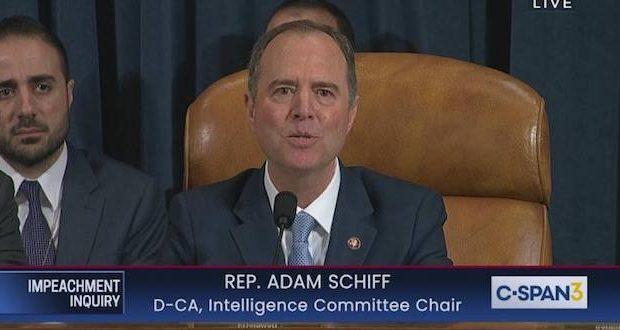 After weeks of hearings, impeachment effort still stands on hearsay

After televised hearings failed to rouse the public or garner support for Democrats seeking impeachment, the mainly hearsay and presumptive testimony came to an end Thursday. Polls show no movement in public opinion.

Democrats leading the impeachment inquiry have yet to discover any direct evidence of the central allegation against President Donald Trump, even after a parade of witnesses and weeks of depositions and hearings.

The leader of the inquiry, House Intelligence Committee Chairman Adam Schiff (D-Calif.), who himself has a long history of making false statements and fueling leftist conspiracy theories, has long alleged that Trump sought to boost his reelection chances by withholding foreign aid from Ukraine to pressure the nation’s leader to investigate former Vice President Joe Biden and his son Hunter Biden.

The closest connection to using Ukrainians to influence an election may be Schiff himself who, in 2017, was recorded asking for information and photos that supposedly showed Trump in compromising positions in a Russian hotel.  Unknown to Schiff, who eagerly and earnestly sought the information, he was being punked by two Russian disc jockey’s posing as Ukrainian security officials with damning information.

Listen to Schiff being pranked on Russian radio, as he seeks non-existent dirt on Trump:

Many say the evidence presented by Democrats in the impeachment came very close to the prank hoisted upon an unknowing Schiff.

The evidence that witnesses have shared to date is laughable to some, and adds up to a pyramid of hearsay that rests primarily on just two original sources: U.S. Ambassador to the European Union Gordon Sondland and former U.S. special envoy to Ukraine Kurt Volker.

Under cross-examination on Nov. 20, Sondland said that no one had told him that the hold on aid to Ukraine was tied to investigations and that he simply presumed that the connection existed. Volker, who had contact with both Trump and the Ukrainians, testified that the aid was never conditioned on investigations.

In remarks made during the testimony of former National Security Council official Fiona Hill on Nov. 21, Rep. Mike Turner (R-Ohio) crystallized the problem of cases that are built on hearsay evidence. 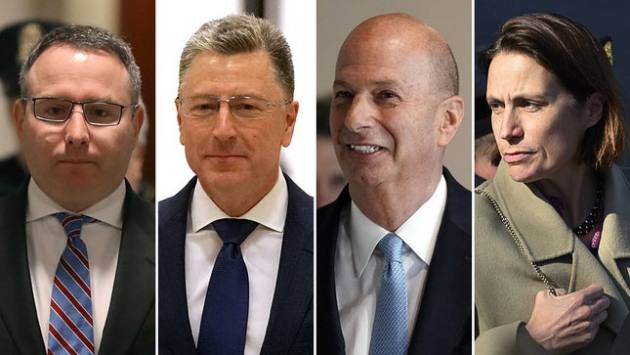 None of the witnesses called testified that Trump had broken any law or acted in an impeccable way. Much of the testimony was related to how an ambassador “felt” after she was removed from her position.

“For those of you keeping score at home, the effort to accuse our president of coercion, extortion, or bribery with these witnesses, as we now come to closing session of this, basically breaks down as follows: We have [State Department official George] Kent and Ambassador [to Ukraine William] Taylor who spoke of hearsay—their hearsay of these matters that they’ve said that they had heard—were all statements that they’d heard from others who have also testified in front of us, so there’s no one that’s missing, there’s no one out there,” Turner said.

Ukrainian President Volodymyr Zelensky and Ukrainian Foreign Minister Vadym Prystaiko have both said they were never aware of a connection between the hold on aid to Ukraine and Trump’s request for investigations; Trump has also denied any connection.

Rep Nunes gets Ambassador Taylor to admit all of his testimony is hearsay:

As pointed out by Turner, Hill testified earlier in the hearing that, “based on questions and statements I have heard, some of you on this committee appear to believe that Russia and its security services did not conduct a campaign against our country.” Hill’s statement appeared to have been aimed at Republicans on the committee who have questioned witnesses about Ukraine’s interference in the 2016 U.S. election.

During the hearing, Turner produced a copy of the report compiled by the committee’s Republicans on Russian active measures in the 2016 presidential election; Republicans unanimously voted in early 2018 to release the report to the public. The first sentence of the report states, “In 2015, Russia began engaging in a covert influence campaign aimed at the U.S. presidential election.” Turner noted that, with a little research, Hill could have avoided the mistake of relying on “questions and statements I have heard.”

A number of witnesses who could shed more light on the events at the core of the inquiry have refused to appear before the committee. The key figures in the case would be Trump himself, the president’s personal attorney, Rudy Giuliani, and Energy Secretary Rick Perry.

Turner also pointed to the single piece of evidence that may prove to be direct. In testimony contradicted by Volker, Sondland said he was told that a White House meeting between Trump and Zelensky was conditioned on investigations.

“You guys want to be the laughing stock of history to impeach a president of the United States because he didn’t take a meeting?” Turner asked. “Please undertake that.”

Previous: Science finds why time flies as we age
Next: Radio Christmas music kicks off this week