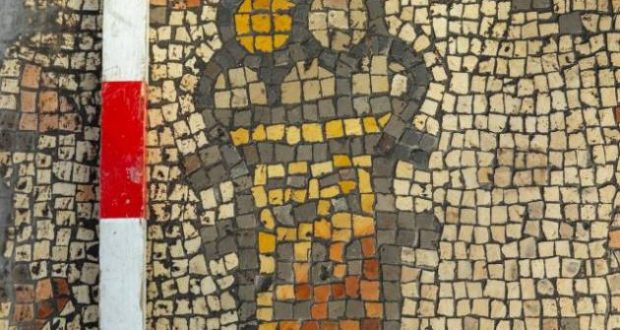 Ancient church discovered with mosaic floor of loaves and fishes

Tiberius, Israel – As new biblical finds continue at an increasingly rapid pace, Israeli Archaeologists have discovered an unusually well-preserved mosaic apparently depicting the miracle of Jesus feeding the 5,000. The mosaic is on the floor of an early Christian Church overlooking the Sea of Galilee.

While not yet open to the public, the discovery is not far from where the Heartland to Promised land tour sponsored by Metro Voice is staying while exploring the Galilee this week.

Researchers from the University of Haifa exposed the mosaic during excavations on the nicknamed “Burnt Church” at the Hippos-Sussita excavation site. Researchers believe the 6th century church was most likely burned down during the Sasanian conquest in the 7th century. The fire actually helped preserve the floor because when the roof burned down, it covered the mosaic floor in a layer of ash, thus protecting it from being damaged by the elements over time. 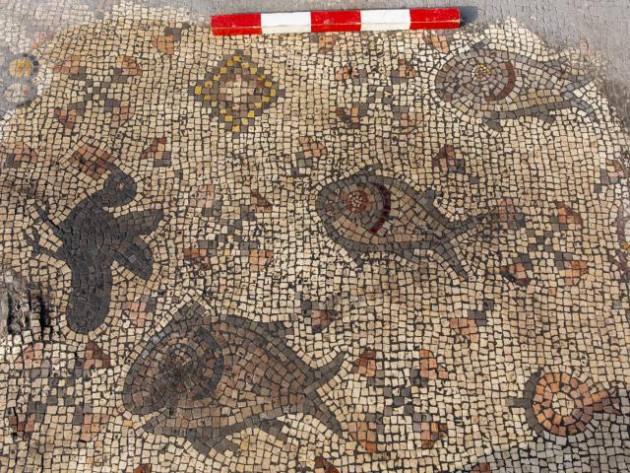 When archaeologists broke through the ash layer, they found a colorful mosaic depicting images of baskets with loaves and fish, a miracle that is believed to have occurred close to the Sea of Galilee.

“There can certainly be different explanations to the descriptions of loaves and fish in the mosaic, but you cannot ignore the similarity to the description in the New Testament: for example, from the fact that the New Testament has a description of five loaves in a basket or the two fish depicted in the apse, as we find in the mosaic”, said Dr. Michael Eisenberg, head of the excavation team in Hippos on behalf of the Institute of Archaeology at the University of Haifa, Israel.

This church was partially exposed about a decade ago, and now Dr. Eisenberg, his colleague Jessica Rentz, and their team have returned to expose the remains.

Some say the discovery of the mosaic featuring baskets full loaves and fish challenges the traditional belief that the New Testament miracle took place at the site of what is now called the Church of the Multiplication in Tabgha, on the north-west side of the Sea of Galilee. 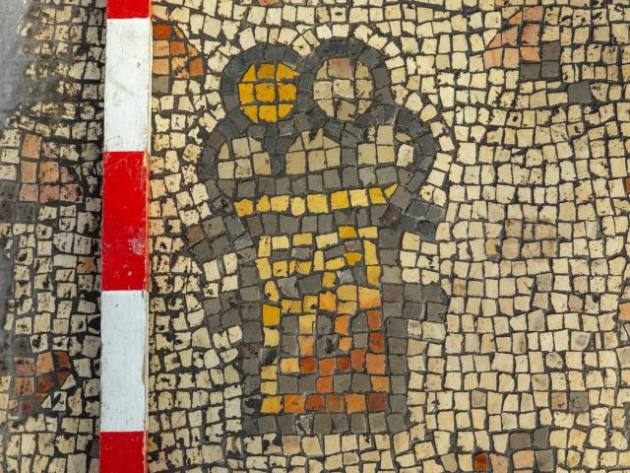 “Nowadays, we tend to regard the Church of the Multiplication in Tabgha on the north-west of the Sea of Galilee as the location of the miracle, but with careful reading of the New Testament it is evident that it might have taken place north of Hippos within the city’s region,” explained Eisenberg.  “According to the scripture, after the miracle Jesus crossed the water to the north-west of the Sea of Galilee, to the area of Tabgha/Ginosar, so that the miracle had to take place at the place where he began the crossing rather than at the place he finished it. In addition, the mosaic at the Church of Multiplication has a depiction of two fish and a basket with only four loaves , while in all places in the New Testament which tell of the miracle, there are five loaves of bread, as found in the mosaic in Hippos. In addition, the mosaic at the burnt church has a depiction of 12 baskets, and the New Testament also describes the disciples who, at the end of the miracle, were left with 12 baskets of bread and fish.” 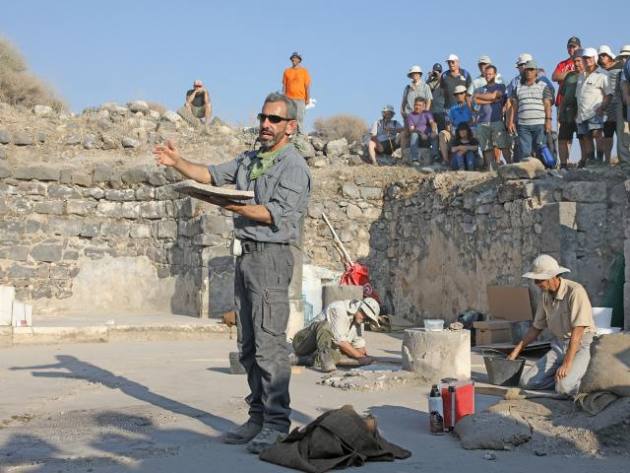 Dr. Michael Eisenberg during a tour of the church, presenting one of the roof tiles which covered the floor (photo by: Arleta Kowalewska)

However, Eisenberg isn’t convinced that the miracle happened near the Burnt Church in Hippos. He points out key differences between the newly discovered mosaic and the New Testament account.

For example, some baskets in the mosaic are full of fruit and not just bread. Other places depict three fish together instead of only two.

“The church is located right at the western edge of Mount Sussita and is the most western point in the city and overlooks – today as it did then – the Sea of Galilee and Jesus ministry and where most of his miracles occurred. There is no doubt that the local community was well familiar with the two miracles of Feeding the Multitude and perhaps knew their estimated locations better than us. The assumption that the artisan or the persons who ordered the work wanted to create an affinity to a miracle which took place nearby must be logical. We will finish the excavation and cleaning of the remaining twenty percent of the mosaic and will carefully examine this assumption. The fish themselves have a number of additional symbolical meaning in the Christian world, and their interpretation requires caution”, he summarized.

During the preservation process, headed by the Israel Antiquities Authority, two inscriptions in Greek were also exposed in the mosaic. 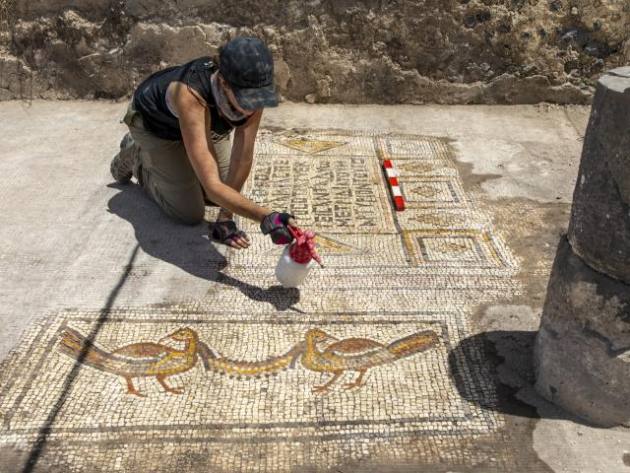 The first inscription talks about the two fathers of the church, Theodoros and Petros creating a sanctuary in honor of a Christian martyr. The second inscription reveals the name of the martyr to be a man named Theodoros. Not much else is known about the martyr.

Researchers also discovered the burnt remains of the church’s doors, a pair of door knockers in bronze casting in the form of roaring lions.