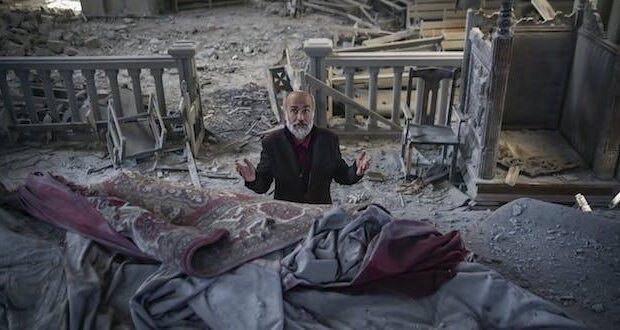 The Ghazanchetsots Cathedral was damaged earlier this year during fighting between Armenia and Azerbaijan. Aris Messinis/AFP via Getty Images

A six-week war in Nagorno-Karabakh, a mountainous region in the South Caucasus, ended on Nov. 9 after Russia brokered a peace deal between Armenia and Azerbaijan.  Now, Armenian Christians fear their ancient churches will be wiped out.

Under the deal, several ethnically Armenian provinces in Nagorno-Karabakh, which Armenians call Artsakh, were surrendered to Azerbaijan in November and December.

This is the latest chapter in a conflict that dates back at least a century. In 1921, the Soviet Union declared Nagorno-Karabakh part of Azerbaijan despite its ethnic Armenian majority. Since that time, the territory has been the site of massive demonstrations, failed international agreements and a brutal war from 1992 to 1994.

The human tragedy has been devastating. In the 2020 fighting alone, over 5,000 soldiers died and more than 100,000 people were displaced. Though the war is over, the rich architectural heritage of the region is still at risk.

Heritage organizations worry that the numerous historic Armenian churches, monasteries and tombstones of the region may face damage or destruction now that they are out of Armenian hands.

The war had already damaged many Armenian churches and monuments. In the fall, Azerbaijani offensives shelled the ancient city of Tigranakert, founded in the first century B.C. by the Armenian king Tigranes the Great.

It also damaged the historic Holy Saviour “Ghazanchetsots” Cathedral in Shusha, one of the largest Armenian cathedrals in the world. Shusha, called Shushi by Armenians, is Karabakh’s cultural capital.

After Azerbaijani soldiers took control of the city, online images showed its 19th-century Armenian cathedral defaced with graffiti. Another 19th-century church nearby, known as the Kanach Zham and dedicated to Saint John the Baptist, also appears to be damaged. 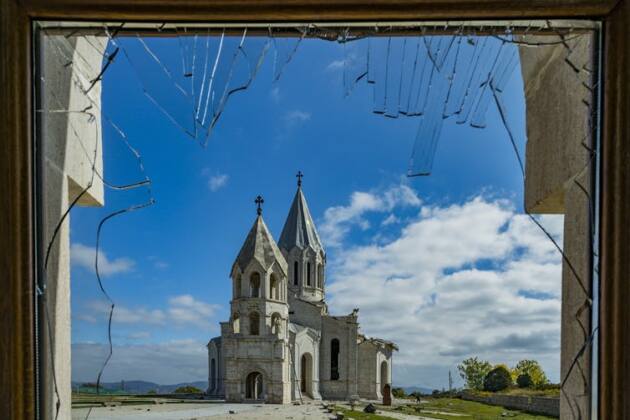 The roof of the 19th-century Ghazanchetsots Cathedral in Shusha was partially destroyed by Azerbaijani shelling in October 2020. Celestino Arce/NurPhoto via Getty Images

Nagorno-Karabakh forms a remarkable chapter in Armenian art history because of its antiquity and its visual and religious distinctiveness. 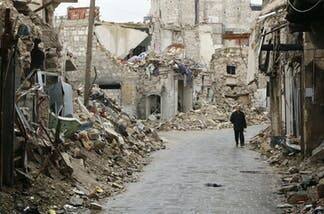 The Monastery of Amaras, in the southeast, was founded in the fourth century, when Armenia became the first country to make Christianity its national religion.

It is the burial place of Saint Grigoris, grandson of Gregory the Illuminator, the patron saint and evangelizer of Armenia. It is also the site of the first school to use the Armenian script.

The walled complex houses a large basilica. Underneath it lies Grigoris’ fifth-century tomb – one of the oldest surviving Armenian Christian burial structures.

Recent archaeological excavations show that this tomb could be entered from the east – quite unusual in traditional church architecture. Scholars link the layout to the Holy Sepulcher in Jerusalem, the place both of the crucifixion and the tomb of Jesus.

Many other churches in Nagorno-Karabakh date later, from the 13th to 18th centuries, and incorporate carved cross-stones called khachkars into their walls. Khachkars often feature inscriptions written in Armenian that record the donor’s name and family members. 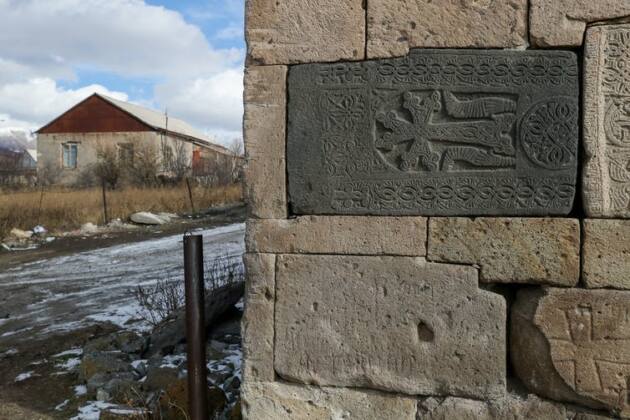 A cross-stone, or khachkar, is built into a church wall in the Armenian village of Sotk. Alexander Ryumin\TASS via Getty Images

In a church in Takyaghaya, the entrance is a beautiful patchwork of khachkars of various sizes and shapes. To the south, near Handaberd, a khachkar that likely dates to the 12th or 13th century is carved with a rare image of the Virgin Mary breastfeeding the Christ Child.

READ: The strange story of this $100 million Russian church

Meanwhile, the Armenian churches like that of Tzitzernavank, in the west, is an extraordinary example of an intact early Christian basilica. It dates from the fifth or sixth century. An upper-level gallery above its sanctuary is an unusual design in church architecture. It is not clear why worshipers would be permitted to stand above the holiest area of the church.

Tzitzernavank also offers evidence of continued Armenian presence through the early modern period. An inscription on the church from before the 10th century asks Christ to “Remember the prayers of your servant, the undeserving Grigor, for his beloved brother Azat.” Another, from 1613, states that “By the will of God … the fortress wall was repaired by the hand of Prince Haikaz…”

Bearing the names of parents, children and other individuals, these inscriptions – and the monuments on which they appear – form a veritable history book of the region.

Rich past, but uncertain future

Nagorno-Karabakh is home to multiple architectural traditions. There are prehistoric caves and petroglyphs, or rock carvings, as well as medieval and modern Islamic tombs and mosques, and bridges, fortresses and palaces. They reflect the layered and diverse communities of the region. 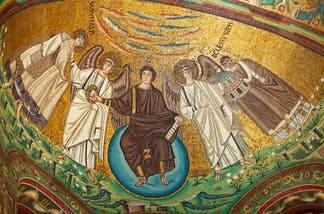 But heritage organizations, museums, scholars, journalists and church leaders are most concerned about the fate of the vast number of Armenian Christian monuments which represent the indigenous Armenian populations – and which may suffer for precisely that reason.

Scholars worry the monuments could face the same fate as the Armenian sites located in the nearby Azerbaijani exclave of Nakhchivan, where soldiers demolished thousands of khachkars between 1997 and 2007.

I believe digital documentation of the Armenian monuments in Nagorno-Karabakh is crucial to record their condition in the immediate aftermath of war. If destroyed, they are gone forever, which scholars like me believe would be a tragic impoverishment of world heritage.

Previous: Pixar’s film ‘Soul’ teaches us to enjoy all aspects of life
Next: President and First Lady wish America a Merry Christmas