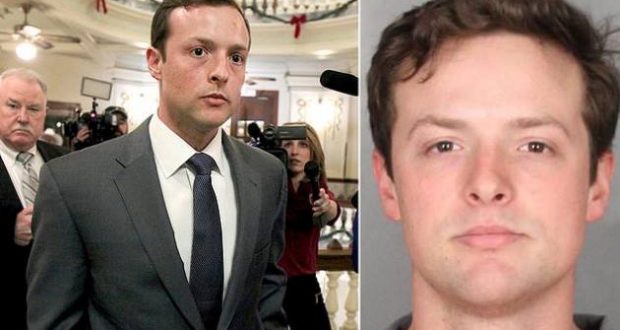 Baylor fraternity president will serve no time for rape

A former Baylor University fraternity president accused of raping a 19-year-old student who said she was a virgin at the time was given a plea deal by a Waco district judge Monday, which outraged many who signed on to a petition urging prosecutors to withdraw the deal.

Jacob Walter Anderson, 23, a Garland resident and former president of Baylor’s Phi Delta Theta fraternity, was indicted on charges he sexually assaulted a sophomore at an off-campus fraternity party in February 2016, when she was 19, the Waco Tribune-Herald said.

The report said 19th State District Judge Ralph Strother accepted the deal prosecutors offered to Anderson in October, which allowed him to plead no contest to the third-degree felony charge of unlawful restraint, and receive deferred probation. Prosecutors also agreed to dismiss four counts of sexual assault against Anderson under the terms of the deal, which include him paying a $400 fine and receiving counseling.

A petition  that had attracted nearly 90,000 signatures as of Tuesday morning is already calling for the deal to be rejected.

“We, the undersigned, respectfully request that the authorities carefully consider the evidence in this case and give this young sexual assault victim her day in court and reject this plea bargain,” the signers said.

“In February 2016, a young woman was handed a glass of punch at a Baylor University fraternity party, and according to arrest affidavits, she became disoriented. Jacob Anderson took her to a secluded part of the grounds behind a tent so she could get some air, the affidavit states. Once they were away from the crowd, he sexually assaulted her, according to the documents,” the petition claimed. “The young woman did all the right things. She was taken to a local hospital. She contacted police. She spoke with prosecutors. But the man charged with her rape has now agreed to a plea deal that would reduce the rape charges to third-degree felony charge of unlawful restraint,” it continued.

In a victim impact statement on Monday, the alleged victim, who is also no longer at Baylor, expressed to the judge how his decision devastated her. She also spoke out against prosecutor Hilary LaBorde, who struck the deal with the former fraternity president and McLennan County District Attorney Abel Reyna for not attending the hearing, the Tribune Herald reported.

“If I had the courage to come back to Waco and face my rapist and testify, you could at least have had enough respect for me to show up today,” she said. “You both will have to live with this decision to let a rapist run free in society without any warning to future victims. I wonder if you will have nightmares every night watching Jacob rape me over and over again?”

She also lashed out at Anderson, who is expected to graduate from the University of Texas at Dallas, for stealing her virginity and other things from her.

She continued: “When I was completely unconscious, he dumped me face down in the dirt and left me there to die. He had taken what he wanted, had proven his power over my body. He then walked home and went to bed without a second thought to the ravaged, half-dead woman he had left behind.”

Prosecutors in the case reportedly agreed to the plea deal because they were worried that Anderson would have been acquitted at trial. Strother also noted that most of the people speaking out against the deal were: “not fully informed, misinformed or totally uninformed.”