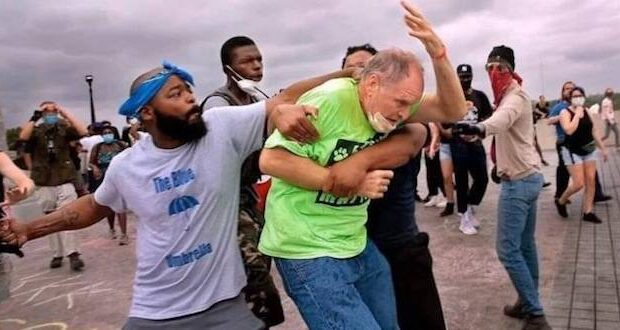 Black Lives Matter protesters beat an elderly man who was praying in front of the namesake statue of St. Louis. Photo: Twitter.

The namesake of the city of St. Louis is now under attack. Black Lives Matter protestors recently shouted down a Catholic priest who tried to defend a statue of French King Louis IX, who was canonized by the church.

Priest Stephen Schumacher was filmed in Forest Park defending an equestrian statue of the King Louis.

“Saint Louis was a man who willed to use his kingship to do good for his people,” Schumacher told the crowd. He insisted that the king had nothing to do with Africans, because during the Crusades he fought against Muslim Arabs, who themselves conquered North Africa centuries before that. Over the course of several centuries, Muslims enslaved over 10 million black Africans.

The priest attempted to tell the protesters more about the history of the Crusades but was shouted down several times, while some said, “let him speak.” Schumacher also asked the crowd to learn more about Louis IX by visiting the local cathedral. One man responded, “Eventually, we’re taking that [down] too, though.”

Black Lives Matter activists and their allies have been defacing and toppling statues of historic figures, associated by some with slavery, racism and colonialism, all over the country. In most places, their actions have been met with virtually no resistance. St. Louis proved to be a different story, where a local Catholic community has been holding prayer sessions in Forest Park in defense of the statue. About a dozen St. Louis police officers formed a line between those saying prayers and those who want the King Louis IX statue removed.

The police line, however, did not prevent BLM protesters from rushing in and beating many of the elderly Catholics who had gathered to pray at the base of the statue.

Catholics remember Louis IX for his defense of the Christian faith and various charitable endeavors. His critics point out that he actively took part in the Crusades and oversaw the burning of Jewish religious texts in Paris. No Jewish residents of St. Louis have demanded the statue be removed.

The wave of statue-toppling follows widespread protests against police brutality sparked by the death of George Floyd at the hands of two white and two minority police officers in Minneapolis last month. The activists initially targeted Confederate monuments but soon began taking down statues of abolitionists and people such as Christopher Columbus, as well as Presidents George Washington, Ulysses S. Grant and even President Lincoln who, of course, freed the slaves. Black Lives Matters is a self-described Marxist organization whose stated goal is the destruction of the United States.

In a June 23 letter, Bishop Donald Hying of Madison wrote that “If we allow the commemorative and visual history of our nation to be destroyed by random groups in the current moment of anger, how will we ever learn from that history? Does toppling and vandalizing a statue of George Washington because he owned slaves, really serve our country and our collective memory?”

“The secular iconoclasm of the current moment will not bring reconciliation, peace, and healing. Such violence will only perpetuate the prejudice and hatred it ostensibly seeks to end…Only the love of Christ can heal a wounded heart, not a vandalized piece of metal,” the bishop added.