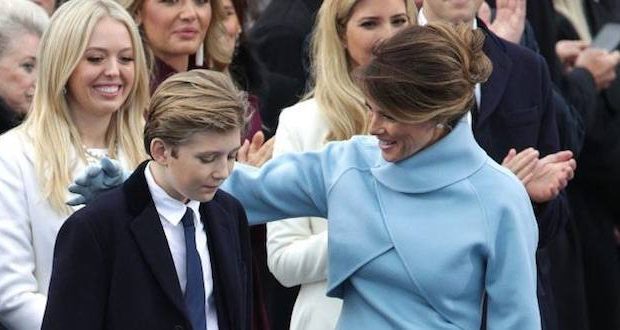 First Lady Melania Trump with son Barron at the inauguration.

A British newspaper issued an apology to First Lady Melania Trump, wife of President Donald Trump, after admitting it published an article that “contained a number of false statements.”

The Telegraph removed the article, which served as the cover story of its Jan. 19 magazine and was titled “The mystery of Melania.”

Assuming an omnipresent air, the author of the article, conspiracy theorist and Newsweek reporter Nina Burleigh, claimed to know of a slew of secrets about the first lady in the article, writing about her past dating back decades but relying heavily on the accounts of four people, only half of whom were fully identified: an unnamed source, a former classmate of Trump at secondary school in Slovenia, an unnamed Slovenian architect, and a fashion photographer.

The rest of the headline read: “White House insiders, Slovenian school friends, and photographers reveal all.”

Burleigh also quoted a recent book by Michael Wolff published about the Trump presidency and which has been widely discredited.

In its apology, the Telegraph wrote: “We have been asked to make clear that the article contained a number of false statements which we accept should not have been published.”

Detailing a number of the false statements, the outlet added: “We accept that Mrs. Trump was a successful professional model in her own right before she met her husband and obtained her own modeling work without his assistance. Mrs. Trump met Mr. Trump in 1998, not in 1996 as stated in the article. The article also wrongly claimed that Mrs. Trump’s mother, father, and sister relocated to New York in 2005 to live in buildings owned by Mr. Trump. They did not. The claim that Mrs. Trump cried on election night is also false.”

“We apologize unreservedly to The First Lady and her family for any embarrassment caused by our publication of these allegations. As a mark of our regret we have agreed to pay Mrs. Trump substantial damages as well as her legal costs,” the Telegraph stated.

The apology was unsigned. Burleigh has not issued an apology.

Melania Trump hasn’t responded publicly to the apology. After the article was published, her spokeswoman took to Twitter to write: “Too bad the author of this ‘in-depth look’ has never met FLOTUS, or bothered to check anything with me. Perhaps Nina Burleigh should get a job with Buzzfeed … she’d be a good fit.”

The apology was added to a huge list of media mistakes compiled by respected journalist Sharyl Atkisson, with the number now up to 69. A slew of smaller mistakes have also been committed by the media since Trump first announced he was running for president. And, as much as they would hope for otherwise, the mistakes and false reporting have proven the claims of fake news made by the President and others.

Beginning in fall 2016, the New York Post, the New York Times, the Washington Post, USA Today, and a number of other outlets committed egregious errors, in some cases leading to reporters getting fired or suspended.

But hours later, Miller took to Twitter to offer a correction: “The MLK bust is still in the Oval Office. It was obscured by an agent and door,” he said.

Miller now works for the Associated Press, a wire agency that a number of media outlets use for political and other reports which also has its share of serious falsehoods in reporting.

On May 16, 2018, a number of reporters and outlets, including the Associated Press and CNN’s Oliver Darcy shared an excerpted comment from the president that made it look as if he had referred to immigrants as “animals.”

The full quote, though, made clear that he was referring specifically to members of the notorious MS-13 gang as “animals,” though that characterization of gang members was still slammed by some analysts and Democrat lawmakers.

Another huge mistake came over the weekend of Jan. 19-Jan. 20. An edited video clip went viral online purporting to show a group of high school students wearing “Make America Great Again” hats in Washington making fun of a Native American elder. The activist, Nathan Phillips, claimed that the students chanted “Build the wall” and had surrounded him.

When the full story emerged, it became clear Phillips had lied, as no evidence supported a number of his claims. In fact, the full video of the situation showed that he had approached the students and zeroed in on one, banging a drum in the student’s face. Instead of reacting, the student, Nick Sandmann, stood still and smiled. When a man with Phillips told the students to “go back to Europe,” Sandmann motioned to his classmates not to react.

Among those apologizing for spreading false news about the incident was CNN host S.E. Cupp, who wrote on Twitter: “Hey guys. Seeing all the additional videos now and I 100 percent regret reacting too quickly to the Covington story. I wish I’d had the fuller picture before weighing in and I’m truly sorry.”

Previous: Kansas City upbringing: From books to movies and back again
Next: Remarks of the President in speech ending shutdown