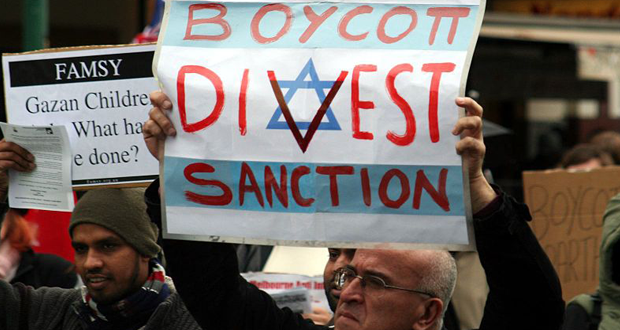 A Boycott, Divestment and Sanctions (BDS) protest against Israel. The movement to destroy Israel economically is based on false information and outright lies used by the groups and spread by the media. Photo Wikimedia Commons.

With an eye on the Boycott, Divestment and Sanctions (BDS) movement against Israel, California State Assemblyman Travis Allen (R) on Monday introduced Assembly Bill 1552, which would ensure that California doesn’t contract with businesses that engage in anti-Israel boycotts based on race, color, religion, gender, or nationality.

“California strongly opposes discrimination. Of particular concern lately is the fact that boycotts of entities and individuals affiliated with specific countries can amount to ethnic, religious, racial and/or national origin discrimination. No group better demonstrates this fact than the Boycott, Divestment and Sanctions movement (BDS), whose use of false, demonizing and delegitimizing propaganda against the State of Israel has become a pretext for the expression of anti-Jewish bigotry,” said Allen.

Since 2005, the BDS movement has targeted the Jewish state for economic and political sanctions. In California, BDS efforts have been widespread within the 10-campus University of California (UC) system. Spurred by the efforts of Students for Justice in Palestine, various student governments and organizations have authorized non-binding resolutions endorsing anti-Israel boycott efforts. During this same time, incidents of anti-Semitism on California campuses have dramatically increased, leading the UC Board of Regents to consider adopting the U.S. State Department’s definition of anti-Semitism.

Allen’s concerns over BDS efforts go beyond “ethnic, religious, racial, or nationality discrimination.” Targeting Israel for boycotts can have a negative economic impact on the Golden State itself, he argued.

According to Allen, “In 2014, California exported over $2.3 billion in goods to Israel, making it the state’s 18th largest export destination. Manufactured commodities are the largest export category for California, with over $1.6 billion, representing nearly 70 percent of all exports to Israel.”

In addition, Israeli technology may also be a source of life—literally—for California. With a disastrous drought threatening the entire state, California political and business leaders have turned to the Jewish state for an innovative solution in the form of desalination water treatment plants.

Allen offered another piece of legislation earlier on Monday with Assembly Bill 1551, the California-Israel Commerce Protection Act, which would require the state of California to divest from companies that boycott Israel.

The legislative initiative taken by the California Republican has been well received by pro-Israel organizations and groups that monitor anti-Semitism.

“We are proud that the state of California is taking up legislation to stop commercial discrimination and boycotts against Israel,” said Roz Rothstein, CEO of the Israel education and advocacy group StandWithUs. “Such boycott efforts are part of the BDS movement’s virulent propaganda campaign against Israel.”

Rothstein added, “The goal of BDS, as admitted by its own founders, is to isolate Israel among nations and convince the world that the Jewish state has no right to exist. This new bill makes it clear that California, a state whose citizens cherish the values of freedom, fairness, democracy, and peace, will make business decisions which uphold its public policy and values.”

EJ Kimball, director of U.S. Operations for the Israel Allies Foundation, told to the Haym Salomon Center, “The South Carolina bill that AB 1552 is modeled after was the product of more than two years of legal research, policy development and public educational resourcing by the Israel Allies Foundation. We’re pleased to see this effective approach taken up in California and elsewhere. Legislation such as this will play a significant role in defeating the BDS movement’s effort to promote commercial discrimination and boycotts against Israel.”

Students for Justice in Palestine, Coalition of West Coast Chapters did not answer a request for comment from the Haym Salomon Center.

The U.S. states of South Carolina and Illinois have passed similar legislation to the California proposal, aiming to take concrete action against BDS supporters, while state legislatures in Tennessee, New York, Indiana, Pennsylvania, and Florida have passed resolutions condemning the BDS movement.

Previous: A Culture of Life: How local organizations are changing lives
Next: Hope, health and healing