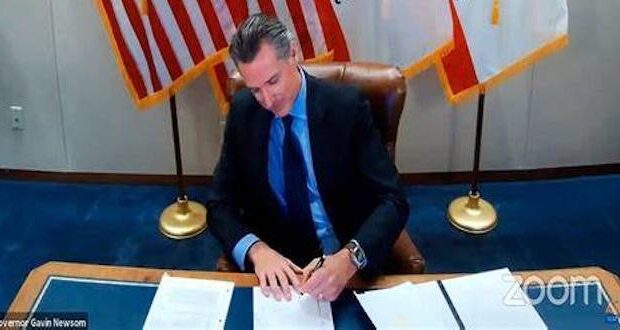 California will pay reparations to descendants of slaves under a new plan supported by Gov. Gavin Newsom.

Newsom has thrown his support behind a bill sponsored by the Democrat-controlled California legislature.  Bill (AB) 3121, titled “The Task Force to Study and Develop Reparation Proposals for African Americans,” will convene a panel who will “investigate the history of slavery in the United States, the extent of California’s involvement in slavery, segregation and the denial of black citizens their constitutional rights—and how much the state benefited from those activities and policies.”

Before signing the bill, Newsom said, “Advancing this cause where it’s not just a question on a questionnaire for a candidate running for office but actually taking shape here, that’s a meaningful moment. This conversation is so long overdue.”

“Senate passage of AB 3121 brings our great state of California one step closer to finally confronting its legacy of supporting the institution of Slavery, Jim Crow, and ongoing racial exclusion,” Chris Lodgson of American Descendants of Slavery said in a written statement.  “The fight is not over. We look forward to the opportunity for follow-up in the upcoming legislative session where AB 3121 can be enhanced to ensure it meets this historic moment in our nation’s history.”

WATCH: What are reparations and will they help blacks?

In order to make the case that California should pay reparations, the ACLU, the California Historical Society (CHS) and other groups have highlighted a handful of stories to try and tarnish the history of the state and paint it in a similar light to the South.

A particular story making the rounds includes how three formerly enslaved black men working as successful businessmen hauling mining supplies were accosted and taken to a local justice of the peace and identified by their captors as runaway slaves. The case went all the way to California Supreme Court, which the CHS identifies as “pro-slavery,” which sided with the supposed slave owners. The men later escaped and disappeared.

Of course, at that time California was in the midst of a gold rush and competition for prime mining areas was intense. Violence and death were a fairly common way to try and steal someone’s location or business.

Does the CHS explain this bit of historical context, which may show that slavery was likely only a convenient excuse to steal a lucrative business? No.

There is also evidence that men who went to California in search of gold from Southern states occasionally took a small number of slaves with and that a handful of slaves were sold in state. These few examples are used to portray the state as broadly racist and pro-slavery.

The history of the United States and slavery is long and complex, but oftentimes academics are too interested in pushing their anti-American agenda to identify the flaws and inadequacies of their own research.

Is it possible that many of the white men and women living in California in the 1850s were racist? Yes. But there’s no evidence that the state had an overly atrocious record on slavery or human rights.

There’s also the question, based on the small number of slaves brought over to California at the time, who would get these reparations? Would it be the identified descendants or others? How would California even pay for it?

Ancestry.com identifies 1% of my father’s DNA as having come from “Cameroon, Congo and Western Bantu” and we lived in California for 10 years or so. Are we going to get reparations?

This measure, especially in the midst of a pandemic, is entirely unnecessary and diverts attention away from the state’s real problems. There are still wildfires burning out of control and the economy is essentially in “free fall” due to the COVID-19 pandemic and the state’s continued restrictions.

Instead of apologizing for the past, more effort should be spent on trying to solve the state’s current issues.

–Wire services and Focus on the Family