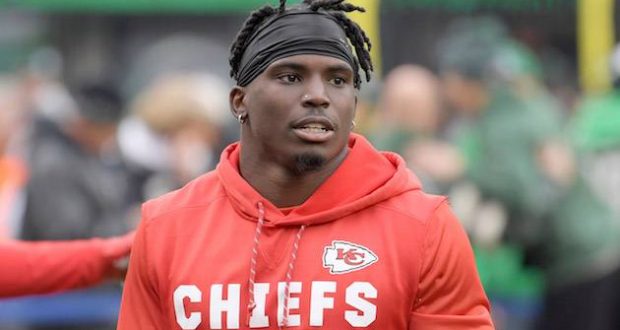 Attorney N. Trey Pettlon, representing Kansas City Chiefs wide receiver Tyreek Hill,  sent a four-page letter to the NFL denying the child abuse allegations in a recording that was released last week.  The letter confirms the recording is Hill and his fiance Crystal Espinal. Following the release of the audio by a local Kansas City television station, Hill was barred indefinitely from all team activities by the Chiefs.

The case has been re-opened by Johnson County District Attorney Steve Howe after he originally reported that though he believed a crime was committed, he didn’t have enough evidence to prove who hurt the couple’s three-year-old son.  Chiefs owner Clark Hunt said Saturday that the team is conducting an internal investigation into the matter.

Hill has agreed to cooperate with the NFL.

Read the full letter to the NFL below:

I represent Tyreek regarding the investigation in Johnson County, Kansas. I am writing you to confirm that Tyreek intends to cooperate with the NFL investigation to the extent that he can under the law, and to correct the record regarding misinformation in the press.

In the audio recording that Ms. Espinal secretly made in the airport in Dubai (and which the NFLPA has already produced for you at your request), Ms. Espinal asks Tyreek to explain how their son broke his arm. She insinuates that either Tyreek was playing too rough with him or he must have somehow fell, and she insinuates that their son says, “daddy did it.” Unfortunately, I cannot comment on other evidence at this time, except to say this incident has been investigated thoroughly. As has been reported, when their son complained of pain in his arm, he was taken to the hospital and examined. I cannot comment on what was reported at that time, but he was examined and released without any indication that the accident that broke his arm was caused by Tyreek or contributed to by Tyreek, or that Tyreek was even somehow involved. And as has been reported, that investigation was closed with nothing about the injury to suggest it was anything but an accident. Again, Tyreek has repeatedly denied harming their son.

In the secret recording Ms. Espinal also indicates that Tyreek “punches” their son in the chest, and Tyreek does not address the allegation. At that point, he didn’t know why she was asking these accusatory questions, but again, he didn’t know she was secretly taping him. This was the first time Tyreek ever heard anyone allege he punched his son to punish him. He categorically denies he has ever “punched” his son in the chest or anywhere on his body, or otherwise touched him in the chest in a mean-spirited manner or as a form of discipline. He also denies that he has ever grabbed his son’s arms and pulled them aside to strike him. There have been occasions when Tyreek has tapped his son gently on the chest with his fingers, while his son was crying and said, “man up, buddy” or “don’t cry, my man.” He has said that in a calm voice trying to redirect him.

He’s never used his fist. He certainly doesn’t do it roughly. He is trying to calm his son down so he can stop crying. He is not hurting him or doing anything to make him cry more. Of course, there have never been any reports of any injury to their son related to “punching.” These were the words Ms. Espinal chose for her recording. Because he did not want to argue with Ms. Espinal in the airport, and he didn’t see any good that would come from it, regrettably Tyreek did not correct her choice of words.

The only thing Tyreek does with his son that is close to what she is describing as “punching” is when they are playing. Tyreek’s son loves to play as if he and Tyreek are marvel comic heroes. His son frequently dresses up in his Iron Man costume or his Spider-Man costume Tyreek bought him, and they will “play fight.” There is nothing rough about this crime-fighting role playing. In fact, his son would be laughing uncontrollably as Tyreek would avoid his son’s “attack” and tag him (not “punch”) in his chest or his legs.

Additionally, it’s a matter of public record that Tyreek was not in his son’s life for more than a year and a half when he first came to live with him. As a result, Ms. Espinal has always been the principal disciplinarian for their son. Both parents have freely admitted they grew up in households where corporal punishment was an accepted discipline, and they both admit that they have used “spanking” as a form of discipline with their child.

Although Ms. Espinal claims in the secret audio to have never used a belt to discipline their child, Tyreek argued that she did, and she has admitted it to him. In fact, in text messages between her and Tyreek, she admits that she caused marks to their son’s buttocks when she spanked him. Her texts to Tyreek after their return from Dubai include the following exchange related to spanking:

Tyreek: “Crystal you know I didn’t cause any bruising or harm to [our son.] But for some reason I still may be charged.”

Crystal: “I know you didn’t. I did. I hurt [our son.] I’m the one that did it. I was hurt and mad at you so I blamed you for everything.”

As Ms. Espinal mentions in the secret recording, the recording and the second report by Ms. Espinal were made during a time when the parties were considering separation and contemplating a custody battle.

Finally, Ms. Espinal claims in the secret recording that their son was terrified of Tyreek. That was another comment Tyreek was hearing for the first time, and he denied it. It is also an observation that is contradicted by eye witness accounts and even by Ms. Espinal herself who states in text communications that “[their child]’s eyes light up when he sees” Tyreek, and “even a blind man can see it.” Or in Tyreek’s words in the audio, “My son loves me.” But in the audio, she presses the point again. It was in that moment that Tyreek made the unacceptable comment to Ms. Espinal. Instead of denying that his son was terrified of him a second time, something that bothered him a great deal, he became frustrated and said she should be terrified too. That comment is inexcusable, of course, and he wouldn’t ask me to defend that here. That comment is also inconsistent with Tyreek’s conversations with Ms. Espinal over the past several months.

We know this because we had a forensic examiner look at Tyreek’s text communications with Ms. Espinal dating back throughout the period before and during the investigation. There are hundreds of pages of text messages documenting entire conversations. Importantly, the forensic examiner verified that not a single text was deleted so it gives a clear picture of their demeanor toward one another. Several things were notable. First, Tyreek never once refers to Ms. Espinal by a derogatory name, not “bitch” or anything else. Second, their conversations were friendly and respectful without exception even during arguments. Tyreek never says anything that is even remotely demeaning, controlling, rude or threatening in nature to Ms. Espinal.

As an aside, it seems clear from the audio that Ms. Espinal is not in fact terrified of Tyreek. She has corroborated that herself. Of course, that doesn’t justify or excuse what he said. But after his comment, once again she continues to press him, and she is very much in control of the conversation. The fact that Tyreek’s comments during that conversation were uncharacteristic and that he regretted them explains why he and Ms. Espinal made the decision to get into family counseling immediately thereafter. Tyreek is currently engaged in both family counseling and individual counseling. He is committed to improving his life and becoming the best parent he can be. The preliminary reports have been positive. He has a tremendous attitude, attends without fail, and when I’ve asked him how it’s going, his response is, “I really like my counselor.” He is invested for his son. He is very upbeat even through this difficult process, and he’s embracing the counseling and the educational aspect to it.

Both parents understand now that corporal punishment in any form is not an acceptable form of discipline and that studies have indicated conclusively it can be harmful to a child in multiple ways. Both are cooperating with DCF and very much love their son who, as has been reported, is in very good health.

As you know, District Attorney Steve Howe’s office carefully reviewed all the evidence including detailed reports, videotaped interviews, medical reports and other significant evidence before he declined to prosecute either party in this case. They have also reviewed the secret audio tape. It should be clear by now that there is a lot of information, including other compelling evidence that points to Tyreek’s innocence, that is not a matter of public record and that cannot be addressed in this letter. All indications are that the criminal investigation is over, and Tyreek still maintains his innocence. Tyreek looks forward to having the opportunity to speak directly with you and to share all the relevant information that he can. Best regards,