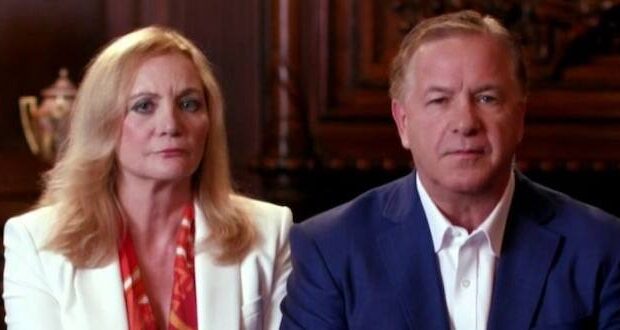 Mark and Patricia McCloskey, who were charged with brandishing weapons against a mob at their St. Louis home in July, have been indicted by a grand jury. The couple was indicted on felony charges of unlawful use of a weapon and evidence tampering. However, Gov. Mike Parson said he will pardon the MdCloskeys if convicted.

The McCloskeys’ lawyer Joel Schwartz said he didn’t know specifics about the charges but said he’s not surprised a grand jury indicted his clients. “I’ll certainly be interested in what was presented to the grand jury,” said Schwartz, who plans to request a transcript or recording of the proceedings, if such records were made.

Since their encounter with protesters this summer, the couple has gained national notoriety through appearances on Fox News and CNN, and by speaking at the Republican National Convention in August.

The charges filed in July said that on June 28, Mark McCloskey, 63, pointed an AR-15 rifle at protesters and Patricia McCloskey, 61, wielded a semiautomatic handgun, placing protesters in fear of injury.

Outside the courthouse, Mark McCloskey criticized the City Counselor’s Office for opting against prosecuting protesters for trespassing in Portland Place, a private, gated street. Nine protesters were initially served police summonses, but City Counselor Michael Garvin said on Sept. 29 that trespassing charges would not be pursued.

“The government chooses to persecute us for doing no more than exercising our right to defend ourselves, our home, our property and our family and now we’re getting drug here time after time after time and for what?” Mark McCloskey said. “We didn’t fire a shot. People were violently protesting in front of our house and screaming death threats and threats of rape and threats of arson. Nobody gets charged, but we get charged.”

After the incident, video emerged of at least one Black Lives Matter protester carrying a gun through the neighborhood.