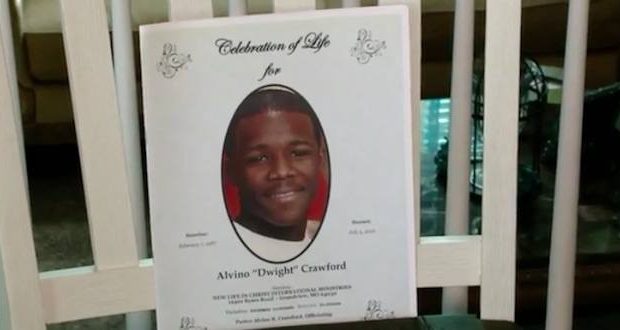 He was adopted as the light of their world and after his tragic shooting death his parents have filed a lawsuit against everyone involved with the gun that killed him.

At 29- years-old, Dwight Crawford was killed with a gun that was allegedly put into a felon’s hands, sold by a Kansas City firefighter who was trafficking firearms.

FOX4 has a special connection to Dwight Crawford. At 3-years-old he was featured on our adoption series, Thursday’s Child. His parents fell in love and welcomed him into their family after seeing him on the air.

Twenty-six years later, that once little boy lost his life to gun violence.

Crawford’s parents are hoping this federal lawsuit will stop other parents from the same type of heartache.

“That smile that I will never see again. That voice, ‘Hi mama hi mam, what you doing?’ I will never hear that again, never,” said Beverly Crawford, Dwight’s mom. “And these cowards took away my son.”

Crawford used the word coward to not only describe the two men who are accused of killing her son but those in the chain of events who put the gun into their hands.

“The term that comes to mind every time I think about it is I was enraged,” said Crawford’s father, Alvino Crawford.

Jerome Walker and Devon Davis are charged with Crawford’s murder three years ago.

Acting as an unlicensed gun dealer, Kansas City, Missouri, firefighter James Samuels is alleged to have sold the gun that killed Crawford.

Samuels bought that gun at Green Tip Arms gun shop in Missouri and it was made by Jimenez Arms, a Nevada-based gun manufacturer.

Walker, Davis and Samuels are being held criminally liable for Crawford’s death, but his parents believe everyone involved with that gun is responsible.

“it is just like the old cliché, it starts at the top and it rolls downhill,” Alvino Crawford said. “If they had followed the proper procedure it is very likely that my son would not have been murdered, at least with one of their weapons. I have a problem with that.”

The Crawford’s civil suit claims Jiminez Arms sold 32 guns directly to Samuels even though the company knew he did not have a license to sell them.
However, Samuels bought the gun that killed Crawford from Green Tip Arms, which the lawsuit claims sold multiple guns to Samuels and should have picked up on his suspicious and illegal behavior.

And former Kansas City firefighter James Samuels, who was sworn to save lives, is charged with trafficking guns to people he knew could not legally own them. According to law enforcement officials, many of them have been used in crimes, including murder. Now the Crawfords are suing him as well.

“You know, it is an epidemic in our country, and it is not about the second amendment,” Alvino Crawford said. “We have no issues with that at all, it’s not about that. This is about doing what is right and holding people accountable when you don’t do what is right.”

The Crawfords are hoping this lawsuit will set a precedent and help change the gun shield laws that protect manufacturers who in many states cannot be held criminally liable for crimes in which their guns were used.