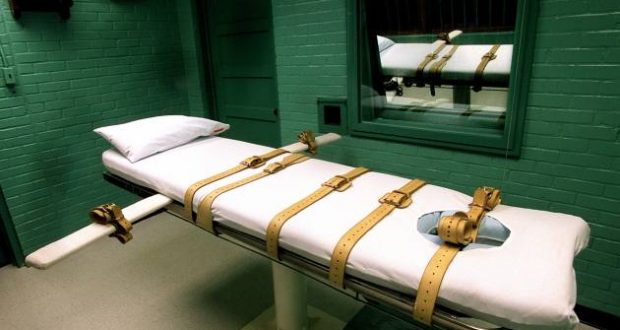 Should inmates on death row be allowed to make an organ donation before their execution? That’s the question before Missouri legislators.

A controversial bill before lawmakers would allow death row inmates to voluntarily donate organs moments before they are executed.

Supporters say Missouri could be the first state in the country to do it, but opponents say not so fast.

The legislation is House Bill 630.

The question now up for debate at the state capitol, elsewhere there is a question as to whether death row inmates should be allowed to give life through organ donation as they`re about to be executed.

House Bill 630 calls for executions in Missouri to be carried out in a manner that allows consenting inmates to make organ and anatomical donations.

30-year-old Julia Sommer has been on kidney dialysis since 2015.  Both of her kidneys have failed and she says she needs a kidney transplant.

Julia thinks the potential of more organs being available through donation is positive even if the organs come from death row killers.

Zach Sanders played a major role in developing the bill.

He`s the executive director of the group Missouri Conservatives Concerned about the Death Penalty.

Sanders` father was murdered by Russell Bucklew, one of the people facing execution in Missouri.

Sanders believes giving death row inmates a chance to donate their organs before execution could bring something positive to all of the tragedy surrounding death row cases.

“Maybe if we can improve a life or even save a life, why wouldn`t we? You know, try to find light in the darkness out of all of this and save somebody`s life,” explained Sanders.

Sanders and his group sold state representative Jim Neely on the bill.

Neely, who represents parts of northwest Missouri including Cameron has been a doctor for years.

Neely told Fox 2, “If we`re going to execute somebody and they have tissues or organs that are usable and they`re wanting to donate, why not do it?”

But not everyone is on board with the bill.

Among those with questions, the Missouri Catholic Conference.

The group opposed the bill when it first came up last year.  They have similar concerns now even though they haven`t yet officially established a position this time around.

The concerns include whether a death row inmate about to be executed is truly in the right frame of mind to voluntarily consent to organ donation and if the state of Missouri should be in the business of harvesting organs from death row inmates.

“Is it proper in that setting to be doing this, you know, and for the state to be doing it when they`re about to put someone to death,” questioned the group`s executive director Tyler McClay.

There are similar concerns the group Missourians for Alternatives to the Death Penalty.

They have already come out against the bill.

Elyse Max with that group told us, “This isn`t a viable source of organ donors and it`s a slippery slope. It`s kind of stating that we value an inmate`s organs more than their innate value as a human. And so, we think this is further exploitation of a vulnerable population.”

Zach and Julia acknowledge the concerns but for them, it boils down to a matter of life and death…they are choosing life even if it comes from death row.

“There needs to be a source for more organs and death row inmates would definitely be a good place to start,” said Julia.

Neely also sponsored the bill during the last legislative session.

It unanimously passed out of committee but never made it to the floor for a full house vote.

So far in this session, the bill does not have a hearing set for it.

But representative Neely is confident that the bill can pass both the House and Senate.

Neely says details on how the whole procedure would work would be left up to the Department of Corrections.

A department spokesperson told us they have no opinion on the bill and that no plans are in place to implement the legislation if it passes.