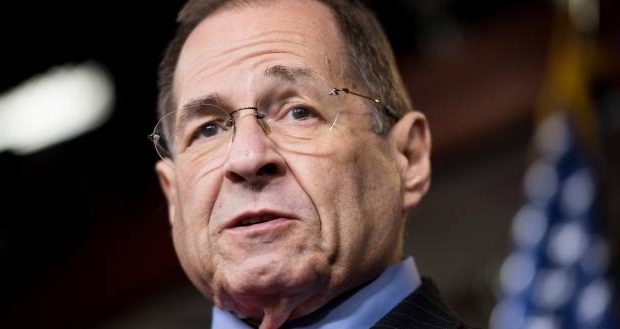 Democrats to issue subpoena for Mueller report in defiance of law

Democrats announced on April 19 they will break Department of Justice regulations and national precedent in obtaining a subpoena for the full unredacted Mueller report.

The redactions were made as required by law, according to Attorney General William Barr, whose team worked with members of Special Council Robert Mueller’s team to make the redactions. That included covering information pertaining to grand jury evidence.

The Department of Justice, in following laws long established by Congress and upheld by courts across the nation, redacted information related to individuals who were interviewed. The practice of keeping grand jury interviews private is common practice in American courts to protect the innocent and encourages witnesses to come forward and be truthful, knowing their statements will be kept private.

Rep. Jerrold Nadler (D-N.Y.), chairman of the House Judiciary Committee, said early Friday he was going to issue the subpoena.

Appearing on “Good Morning America,” Nadler told anchor George Stephanopoulos, who previously worked in the Bill Clinton administration, that his committee should be able to see the full report, including information that is currently redacted in both versions.

The most heavily redacted version was published on the Department of Justice website for the public to read; another version, with fewer redactions, was sent to some members of Congress, including Nadler.

Nadler said that the members of his committee need to see the full report to make “informed decisions,” including whether or not to try to impeach President Donald Trump.

“We need the entire report, unredacted, and the underlying documents in order to make informed decisions,” he said.

Nadler said when he issued the subpoena that he expects the Department of Justice to comply with the subpoena by May 1.

Robert Mueller, the special counsel, concluded that there was no conspiracy or cooperation—known by many as collusion—between Trump or his campaign and Russian actors who sought to influence the 2016 presidential election.

The report showed the results of an investigation that took around two years and cost some $30 million. Of the 800 witnesses interviewed, no person was found to have colluded with Russia.

Nadler said that he’s “open to working with the department to reach a reasonable accommodation for access to these materials, however I cannot accept any proposal which leaves most of Congress in the dark, as they grapple with their duties of legislation, oversight, and constitutional accountability.”

While Barr and Deputy Attorney General Rod Rosenstein concluded from the evidence that Mueller gathered that Trump also did not commit obstruction, Nadler said he disagrees and believes that the special counsel wanted Congress to take up the obstruction issue.

The move by Democrats to change one hundred years of legal practice between grand juries, witnesses and the public is feared by many in the legal community of destroying long-standing guarantees of privacy of Americans called to give witness testimony before the courts.

Previous: You’ll love these 4 things about new film Pilgrim’s Progress
Next: Homeless will experience the hope of Easter this weekend