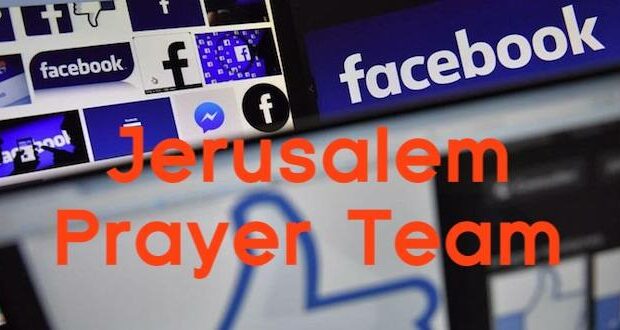 The Jerusalem Prayer Team Facebook page has still not been restored after it was banned by the Big Tech company in May. The action by Facebook came after a mysterious barrage of anti-Semitic comments flooded the pro-Israel and pro-Jewish site.

The page was started in 2002 and had amassed more than 76 million followers from around the world before Facebook suddenly unpublished the page on May 15. The page’s administrators appealed the decision with Facebook the same day to no avail. Over the previous three days beginning on May 12, the page had been inundated with what appeared to be a coordinated influx of negative comments, many of them crude and expressing anti-Semitic sentiments. Among the negative comments on the page were some reading, “Hitler was right” and “U all dead soon.”

Michael Evans, the page’s founder, told CBN that the more than one million negative comments were the result of an “organized attempt by radical Islamic organizations.”

Evans traveled to the Gaza border to witness the conflict between Israel and Hamas. Around the time the prayer group was banned from Facebook, he had traveled to Jerusalem to be the host of a television event at the Friends of Zion Museum media center along with several celebrities, including actor Jon Voight and Pastor Robert Jeffress

The high volume of negative comments began during the 11 days of violence between Israel and the terrorist group Hamas last month, during which more than 250 people were killed before the fighting was suspended when Israel and Hamas agreed to a ceasefire. The conflict began on May 10 when Hamas, which controls Gaza and is labeled a terrorist group by Europe, the United States and other nations, fired over 5,000 rockets into Israel. Hamas used clashes between Arabs and Israeli police at the Al-Aqsa Mosque compound as an excuse, but has been firing rockets into Israel for over a decade. Israel responded with airstrikes targeting Hamas infrastructure in Gaza.

The page was “deleted by our system due to being not policy compliant,” a Facebook support representative wrote in an email. “Please consider this decision final.”

The page administrators expressed that they were “amazed and disappointed” that Facebook allowed such comments to remain visible. “We had understood they had a corporate commitment to prevent offensive or false information from being displayed, but in our case, there was no apparent intervention by Facebook,” the administrators said.

“The devil knows exactly how strong the voice for Israel the Jerusalem Prayer Team has become in the online and social media world. This is the battlefield of the new age, and it is vital to Israel’s survival. The Jewish state is facing a crucial crossroads moment. The world has made it clear that they will condemn self-defense on the part of Israel and ignore blatant and unprovoked attacks by terrorists. We must do our part, and I need your help. Jewish lives depend on what we do right now.
We are asking every friend of Israel to join us in urgent prayer. This is a spiritual war, and we are fighting against demonic forces that can only be defeated with spiritual weapons. Please ask God to give us favor so that this horrible decision will quickly be reversed. Pray that God will influence the world to stop cursing Israel. Pray that the Enemy will be conquered. We cannot allow Satan to win. We cannot stand by while his Jew–hating followers silence those who stand for Israel.”

The group and organization have many friends and Israelis understand it as an important partner in the country’s survival.

Supporters from Sean Hannity with Fox News to hundreds of other media and political figures have come to the prayer team’s defense.

Facebook Shuts Down Prayers for Israel Page with Over 77 Million Followers https://t.co/peuuI3qH9x

Those include Israel Prime Minister Benjamin Netanyahu who has regularly praised the group and Evans. “Mike Evans is a fighter for freedom in a world of darkening and narrowing horizons. In his devotion to Israel, Mike has consistently demonstrated the moral clarity that is necessary to defend Israel against the lies and distortions of its enemies, and championed the Jewish people’s claim to the Land of Israel…I look forward to strengthening our friendship on his many future visits to Israel.”

The move by Facebook comes even as it allows pro-Hamas groups and comments to flood other pages on the site.

For those wanting to support the Prayer Team and bypass Facebook, they can do so by downloading the Jerusalem Prayer Team app.

The creator’s say it’s a great way to stay connected with praying Believers from around the world and share prayer needs with them as well. Apple App https://apple.co/3yu390B Android App https://bit.ly/3fCvdWS