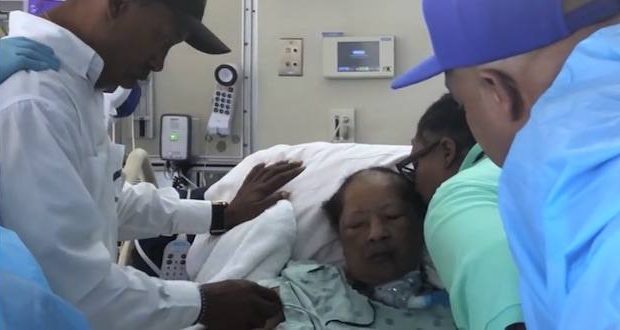 Family rushes to save mom after life support forcibly removed

A Texas woman who was forced off life support by her hospital has shocked doctors by continuing to breathe. Instead of giving needed treatments to improve her condition, other life-saving services have also been removed.

A Texas Right to Life spokesperson says the hospital is only allowing two people in Jones’ room and has banned all cell phones from the hospital room in an attempt to prevent videos being released to the public. The hospital’s actions, which have not been enforced for other patients, may be against the law.

Carolyn Jones, 61, went to Memorial Hermann Southwest Hospital in Houston November 2018 to receive treatment for a stroke she suffered the year before. She’s been there ever since.

On May 3, Jones’ family was notified that the hospital’s ethics committee decided it was time to remove her life support — without the permission of her family. The decision is based on a Texas law called the “Advanced Directives Act” (also known as the 10-Day-Rule) which allows hospitals to take patients off life support without consulting their families after the hospital gives them a 10-day notice. During those 10 days, families can move their loved ones to another treatment facility.

The Jones family simply can’t afford to transfer Carolyn to a second hospital.

Her daughter Kina told 12News that doctors removed her ventilator at 2:00 p.m. Monday, May 13. To their surprise, Jones continued breathing on her own.

The hospital refused to give Jones any life-saving treatment, including having her respiratory secretions suctioned.

“They pulled her off and left… no doctor came in to check her vitals or anything. They said it was our responsibility to suction her,” Kina told The Daily Wire.

“Because my mom did not pass away, they are pulling away other things so she does pass away. I am watching my mom fight for her life; this is murder,” Kina said.

Kina says doctors also took her mom off dialysis, a treatment she had before suffering a stroke.

Despite the hospital’s decision Kina says her mom is relatively responsive and “will look at you when you say her name and she will follow you with her eyes.”

Kina created a GoFundMe account to raise money for her mom’s transfer to another facility.

“There has been a facility to come forth and agree to accept Mrs. Jones and provide care but this requires funding… please find it in your heart to help Mrs. Jones stay alive,” Kina wrote on the GoFundMe page.

Memorial Hermann Southwest Hospital told 12News in a statement that they are unable to comment specifically on Jones’ case due to privacy laws.

“We understand how painful it can be when difficult medical decisions must be made, and our hearts go out to families in these circumstances. End-of-life decisions are made by physicians after careful and thorough consultation with patients, their families, the healthcare team, and a medical ethics committee. The decision-making process is outlined in Texas law and can take many months. The law provides a tool to balance the tough choice between carrying out patients’ and families’ wishes and the ethical duty not to increase or prolong patients’ suffering,” the statement continued.

On Tuesday, the Texas Senate passed a bill to remove the 10-Day-Rule called SB2089.

Carolyn’s husband Donald Jones hopes it will help other families in their situation.

“This is not right for people to be able to make a decision for anyone to live or die when they are alive,” he told 12News.

Previous: Japan tests world’s fastest bullet train
Next: US ambassador to Germany is a gay Trump supporter and Germans can’t handle it