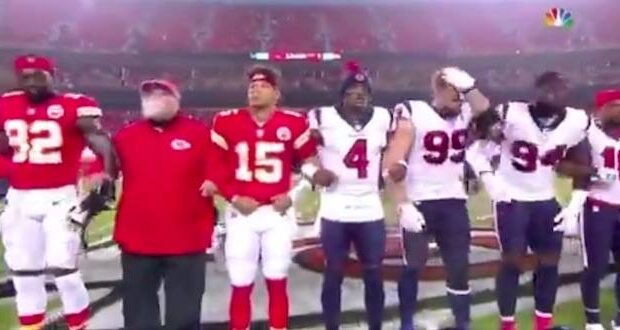 Thursday night’s game between the Kansas City Chiefs and Houston Texans at Arrowhead Stadium was a trial run for the NFL’s new social justice policies and support for Black Lives Matter. The results were mixed as fans expressed a vocal desire to leave politics outside the turnstiles.

During warmups, Chiefs players wore shirts that said “Vote.” The words “End Racism” and “It Takes All Of Us” were inscribed in the end zones. The league allowed players to wear similar visuals on their helmets. The Chiefs locked arms at the end zone during a video against social justice and police brutality. They also stood together as Alicia Keys sang, “Lift Every Voice and Sing,” commonly known as the black national anthem.

Kansas City Chiefs fans appeared to boo the moment of unity with the Texans prior to the game starting.

During the National Anthem, the team stood on the sidelines once more, many of them linked arms again. All but one player, Alex Okafor, stood. The Texans remained in the locker room during both “Lift Every Voice and Sing” and “The Star-Spangled Banner” but came out onto the field for the moment of solidarity afterward.

Many fans booed when the teams locked arms. The moment quickly went viral on Twitter, racking up over hundreds of thousands of tweets from various sources during the game.

“I thought Houston not coming out for the National Anthem of our Country — That’s what the boos were for,” fans Brett and Nicole said after the game. “The Chiefs, I thought they handled it with class, but I’m not a big fan of what Houston did.”

Kansas City councilman Eric Bunch tweeted, “Some NFL fans booing the players for standing and locking arms in a moment of silent unity proves that for them the ‘standing for the flag’ was always about perpetuating white supremacy.”

Mayor Quinton Lucas tweeted, “We’re a city of good people. I heard boos too. But we also have hundreds of thousands more around here who respect the message the players are sharing; who respect the rights of our players and people to voice a strong message and who are working to make us better each day.”

Missouri Senator Josh Hawley took issue with the backlash, tweeting, “Missouri has the best fans in the country. Don’t blame them for being tired of NFL/corporate woke politics hammered down their throats.”

The NFL was quick to show support of the BLM movement, in the pre-season it banned decals and signs of support for police officers and those murdered during BLM protests across the nation.