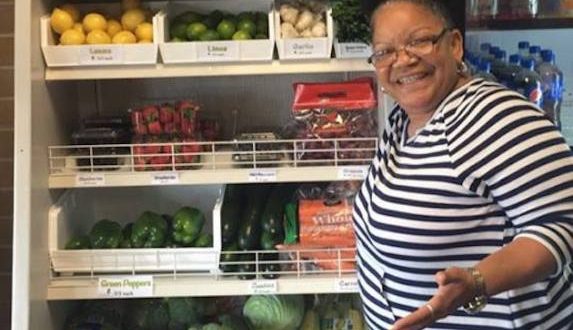 For many people it’s easier to eat the bad food that fills our cupbords and fridge than go out and buy the healthy stuff.  It’s a fact that people tend to eat food that’s convenient to eat.

Studies show convenience often leads to the food choices people make, and that’s certainly true in one area of the metro. Neighbors there complain there’s no fresh produce, and junk food is easier to find and prepare.

One east Kansas City warehouse is like an oasis, providing fresh food for people living in food deserts. Since February, Max Kaniger has operated Kanbe`s Markets, a nonprofit agency, from that Troost Avenue clearinghouse.

Each week, he collects donated food from produce brokers around the metro. He stocks his convenience store kiosks with fresh fruits and vegetables that aren’t available to customers living in areas that aren’t served by a supermarket.

“This is my stock for the week,” Kaniger said, while standing in the midst of six large palates of fruits and vegetables still in their crates.

Once per week, Kaniger visits his client markets, most of which are neighborhood speedy markets — businesses that don’t pay him a dime for his services

“I won’t sell that,” Kaniger complained, while removing a spoiled vegetable package from one of his kiosks, a testament to his dedication to his clientele.

The USDA says 23 percent of all Americans live in areas where they’re either under-served by the grocers in their community, or there’s no sustainable source of retail groceries in their immediate area.

That same government agency said 350,000 people in the Kansas City area live under those conditions, too.

“This is a fixable problem,” Kaniger said. “This is something we can fix. Kansas City can then be a model for the rest of the country to follow, where everyone has consistent access to fresh affordable food.”

Kaniger said his nonprofit will have delivered 250,000 pounds of fresh groceries by the time this year ends. The retailers that sell his products receive a small percentage of the sale price. Most of those stores sell routine convenience stores items, ranging from soda and chips to a few frozen foods.

“I think it’s awesome,” said Dani Donbek, a UMKC student who just moved into the neighborhood near one of Kaniger’s sales locations. “I think it’s great. People need to be more aware there’s local produce. I think it’s great for people to be able to change their diet.”

Kanbe Markets usually include baskets filled with items that don’t require refrigeration, such as potatoes and onions, as well as refrigerated kiosks, for vegetables and fruit that keep their freshness longer in the cold. The Phillips 66 store at 59th and Troost is typical, in that it offers fresh produce of both varieties.

“Anybody would like to make it easier to put food on their table. By making fresh food more accessible, I think a lot of people are making that choice,” Kaniger said.

Kaniger said the seven stores he`s servicing is all he can handle for now. For a time, he was a one-man operation, but he recently took on an additional staff member and a few volunteers who assist. He said those refrigerated kiosks cost $3,000 apiece, and unlike produce, money doesn’t grow on trees.

You can learn more about Kanbe Markets by checking out the nonprofit’s Facebook page here.