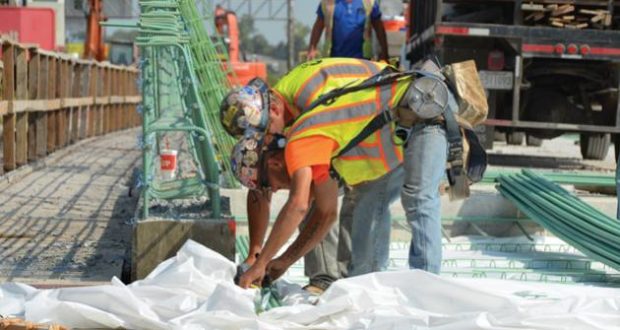 When the Missouri Department of Transportation conducted an extensive study of roads and bridges, including the Buck O’Neil bridge in Kansas City several years ago, the inspection revealed a laundry list of structural deficiencies, including significant rust to steel elements, pervasive corrosion, fatigue cracking, and more.

Like many roads and bridges across the state, it’s showing its age.

Ribbons were cut for the iconic triple-arch structure, then known as the Broadway Bridge, on Sept. 9, 1956. In the 62 years since then, millions of cars and trucks have crossed the 2,500-foot bridge, a major link connecting Kansas City’s northland to downtown. Indeed, approximately 44,000 vehicles rumble across the bridge daily on 169 Highway.

Age, wear, and the elements have taken their toll, and now that the bridge is nearing the end of its projected lifespan, the city and state have launched a repair project. The southbound lanes closed in May for repairs expected to be completed by the end of the year. Only a Band-Aid, the repairs will buy time for planning and building a replacement bridge in the next five years. 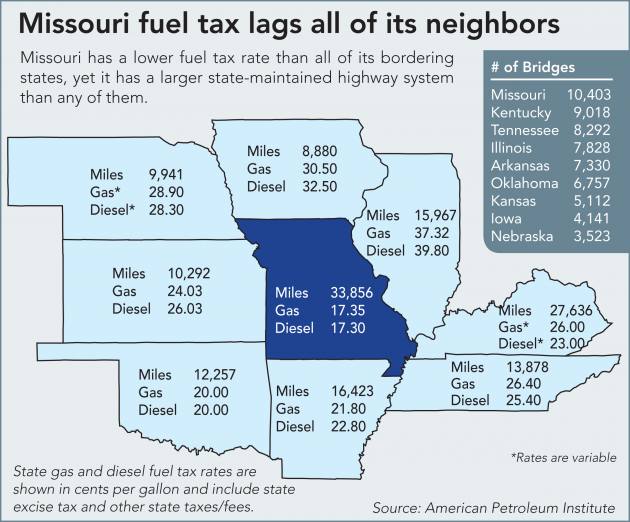 Not all of the state’s bridges and roads are so lucky, however. Many across the state also are near the end of their useful life — and in some cases, well beyond it — but there aren’t available funds for their repair or replacement. Because of these funding shortfalls, Missouri spends just 43 percent of the national average on operations and maintenance per state-controlled mile.

Compared to other states, Missouri ranks 46 in revenue spent per mile, primarily because the state’s large system — which is the country’s seventh largest network of highways at 33,856 miles — is funded with one of the lowest fuel taxes in the country. In fact, only Alaska has a lower tax on gasoline. Looking at Missouri’s eight neighboring states, Missouri has the largest highway system but the lowest fuel tax, and several of those surrounding states also benefit from additional revenue sources for transportation, like toll roads and general sales taxes.

As a result, the Missouri Department of Transportation (MoDOT) can’t keep up with its mission to maintain and improve the state’s roads and bridges. Missouri currently has 922 bridges in poor condition on the state system, and that number grows a little each year because almost 4,000 of the state’s bridges were built in the 1950s and 1960s and are at an age when they need to be replaced.

“Missouri is spending more than it is receiving in revenue,” said Patrick McKenna, director of MoDOT. “This enables us to match federal funding today, but not for long. We are able to maintain the state’s roads and bridges in the condition in which they are in today, but if we want to improve the system, improve safety, reduce congestion, enhance economic development and match future federal funding, additional investment is necessary.”

To help fix the problem, voters will be asked in November whether to increase the state gas tax by 2.5 cents each year for four years. The present 17-cent tax would top out at 27 cents in 2022. Under the proposal, taxes on alternative fuels for motor vehicles, including natural gas and propane, also would increase to 27 cents per unit equivalent to a gallon of gasoline beginning in 2026. Known as Proposition D, the proposal was recommended by the 21st Century Missouri Transportation System Task Force, a 23-member committee of legislators, law enforcement, safety advocates, and others who studied the state’s transportation woes and evaluated ways to generate more revenue.

Under the measure, a portion of the tax revenue would fund the Missouri State Highway Patrol, which would free up more than $288 million annually upon full implementation for state road and bridge construction and maintenance. It also would provide $123 million annually for local governments to use on roads and bridges. Finally, the measure would exempt Special Olympic, Paralympic, and Olympic prizes from state taxes.

“The Legislature took on the difficult challenge of asking Missourians to invest their hard-earned money to increase funding for the State Road Fund to ensure dedicated funding for our Highway Patrol partners and begin to address the public policy issue of unfunded transportation needs in our state,” McKenna said. “Public safety and public works go hand in hand to keep citizens safe, which is why these two functions are supported by the same funding source in the state budget.”

As Missouri’s population and economy have grown, greater demand on the state’s major roadways has led to more congestion and wear and tear, noted a 2018 report by the American Society of Civil Engineers on Missouri’s infrastructure. In 2016, Missouri’s population reached approximately 6.1 million residents, a 9-percent increase since 2000. Over the same time frame, vehicle travel on Missouri’s highways increased by 13 percent, and vehicle miles traveled are projected to increase an additional 20 percent by 2030.

Much of the reason that additional funding is necessary is because Missouri’s fuel tax has not been increased since 1996, and over the last two decades, the purchasing power of the tax has effectively dropped from 17 cents to 7 cents due to inflation and ever-improving vehicle fuel economy, according to the task force. At the same time, the cost of the road and bridge building materials like asphalt and concrete have doubled, and labor costs have risen.

“The bottom line is that Proposition D will provide critical resources for the state, cities, and counties to work for safer roads and bridges for motorists and their families traveling Missouri,” said Col. Ron Replogle, retired superintendent of the Missouri State Highway Patrol and honorary chairman of SaferMo.com, a statewide coalition supporting the proposal. “This is the very definition of ‘To Serve and Protect’ that is the first command for law enforcement and first responders. The mission of protecting motorists and their families will be boosted dramatically with a yes vote on Proposition D.”

If voters approve Proposition D, MoDOT will work with communities across the state to develop a strategic plan of action on using the additional funds. For more details about the measure, visit SaferMo.com.