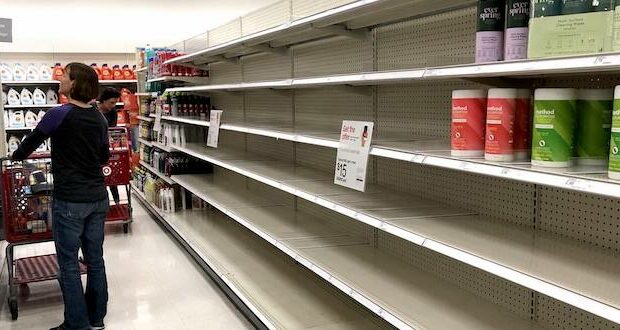 Skyrocketing prices and shortages for most grocery and household products will increase in the coming weeks, according to supermarket officials. From Kansas to Pennsylvania and Florida to Alaska, consumers are in for a shock.

Supply chain problems, caused by labor shortages, fuel costs, over-regulation, Congressional spending and mandates are creating the biggest increase in inflation in over a generation.

The Biden administration has been roundly criticized on the left and right in recent weeks over policies that have contributed to a record number of container ships waiting to unload off of America’s coasts. Just outside Los Angeles alone, 100 ships are anchored. They typically only have 17 anchored, waiting to be unloaded.

The story is the same for most other large ports where mandates have interfered in the availability of local labor. This week, Florida Governor Ron DeSantis said there are no problems at Florida ports and encouraged ships to reroute to take advantage of the state’s lack of mandates and ready workforce.

But the offer may have come too late for most businesses waiting on product.

The problems may be hitting smaller, local grocery chains the hardest because they lack the buying power of national chains. Andrea Karns, vice president of marketing at Karns Foods, a grocery chain with nine locations in the Harrisburg, Pennsylvania says the amount of product ordered is not being delivered.

“We’ve not seen hoarding, but we are getting incomplete orders,” Karns in a phone interview. Paper towels are just one of the items experiencing a shortage. “We don’t have any categories that are totally wiped out. Products are coming in but as a shopper, you may have to be flexible; change your meal plan or try a different brand.”

Hoarding not a problem right now

“I can’t say hoarding has popped up on our radar yet,” Fasula says. “Even though the supply chain has been chaotic, I don’t think customers are worried that it will be like the pandemic, that they can’t find anything. They are seeing favorite brands missing from time to time.”

The company is not yet limiting purchases as it had done early in the pandemic.

How manufacturers are responding to shortages

Every manufacturer has had challenges at this point, Fasula said. Frequently, they will fulfill only partial orders. Manufacturers are reducing the amount of product they deliver by applying a certain percentage to all their customers. For example, they may send 20 percent less product than what was ordered across the board. “This is going to last quite a while, and I don’t see an end in sight. If someone can tell me when the labor shortage will end, that is when inflation will end. Higher labor costs are driving inflation.”

Most believe the Biden administration and Congress have failed the consumer. A key issue is extended unemployment while millions of jobs remain open.

“It is incumbent on the government at this point to give people incentive get back to work, lift regulations, look at bottlenecks in the supply chain to get it moving quicker,” Fasula warned.