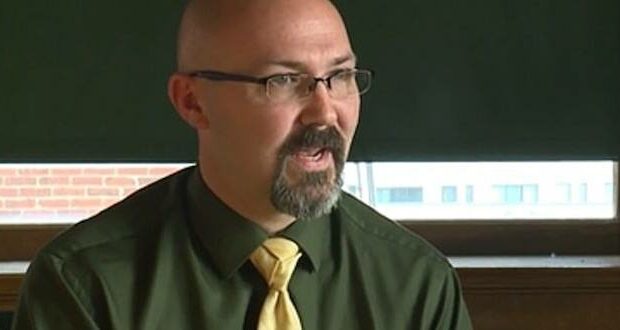 John Magoffin says he was fired for bringing up tough questions about race in his class.

Harrisonville teacher sues district over firing a year ago

A former Harrisonville science teacher is suing the school district, alleging it violated his civil rights when it fired him last summer.

John Magoffin’s suit centers around the Harrisonville school board’s decision to fire him for allegedly using a racial slur in a biology class, making remarks about the Black Lives Matter movement, and allegedly saying that some people believed Martin Luther King Day was “Black Privilege Day.” His firing came after the district held a public hearing that lasted nearly 12 hours in June 2021.

Some of the racial allegations against Magoffin were found to be baseless, such as one student alleging she was not allowed to remove her mask (the district required masks in the classroom) because she was black. Other allegations made against him were also refuted by other students in his class.

“The board concluded that Mr. Magoffin’s use of inappropriate language violated the rules and regulations of the district and was unacceptable conduct for a tenured teacher in the district,” the school district said when it announced its decision.

In his lawsuit, Magoffin contends he was singled out for “state-sanctioned single-viewpoint discrimination” for trying to teach students higher-level of thinking and analytical skills that challenged their viewpoints. He said he was trying to prepare them for real-world situations.

He pointed out that as part of the district’s freshman and sophomore level courses, students are required to read “To Kill a Mockingbird,” which uses the n-word in its entirety. He contends he was condemning the use of the word when his discussion about race and language identification with a student was overheard by others.

“This benign discussion turned into a federal case because the district was bent on reverse discrimination, retaliating, and canceling a white, male, Christian teacher, who some might label as conservative, from the education culture of Harrisonville for fear of backlash,” the suit said.

He said the district discriminated against him based on his race, color, sex and religion and retaliated against him when he complained that administrators suspended him in April 2021. Magoffin contends his rights were violated under the Title VII of the Civil Rights Act and Missouri Human Rights Act. He seeks in excess of $75,000 in damages.