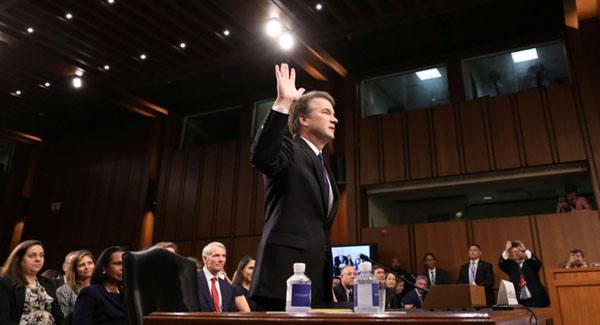 Democrats’ willingness to go low demonstrates why so many Republicans believed they needed someone who would fight dirty. There were many points of contention that divided Donald Trump voters from other Republicans in 2016. But differences about trade and foreign policy were always secondary to those about what kind of person the GOP needed in order to win back the presidency.

Most mainstream Republicans were looking for a qualified conservative. Trump voters wanted someone who would fight the Democrats without regard for fair play or the whole truth. They wanted someone who would be as ruthless and as unapologetic in slandering opponents as they conceived Democrats to have been during the Obama administration. And in Trump that was exactly what they got.

To his supporters, there was never much doubt that the same qualities that caused the political establishment to despise him were what made him the man to defeat Hillary Clinton. Nevertheless, many Republicans still considered Trump’s underhanded, norm-busting tactics with distaste if not outright disgust.

But after the last two weeks, it’s likely that the number of those in the latter camp has declined precipitously.

The willingness of the Democrats and their mainstream-media allies to use a solitary, unsubstantiated, 36-year-old allegation to turn Judge Brett Kavanaugh into a Me Too villain whose guilt of a heinous crime is to be assumed despite the lack of proof or a semblance of due process has shocked his friends and supporters. But it has also vindicated the Trump approach to politics. After the public assassination of Kavanaugh’s character over the last week, there can’t be many left in the GOP who will still dispute former Breitbart CEO Steve Bannon’s assertion that politics is warfare and Trump is thus justified in anything he does to combat his opponents.

The Kavanaugh confirmation fight isn’t alone in its ugliness, or unprecedented in recent political history. Democrats can point with some reason to the refusal of Senate Republicans to grant Judge Merrick Garland a hearing, let alone a vote, for his nomination to the Supreme Court as evidence that the GOP didn’t play by the rules when the shoe was on the other foot. Garland was spared the indignities of what would have been a nasty confirmation fight, but that doesn’t change the fact that the GOP was prepared to break with tradition to keep Democrats from handing the court to a liberal majority.

Democrats may think Garland’s fate justifies any tactic they can employ now to delay or defeat Kavanaugh. But, as with their precedent-shattering personal assault on Judge Robert Bork in 1987, what is happening to Kavanaugh is taking American politics to a new low. They may believe they are simply fighting fire with fire, but as Republicans have learned, a belief in scorched-earth warfare has its costs as well as its benefits.

There is an irony here: Many Republicans spent the eight years of the Obama presidency castigating their leaders as ineffectual patsies who refused to fight. Democrats may have seen Majority Leader Mitch McConnell as a ruthlessly effective obstacle to President Obama’s agenda, but tea partiers saw him and former House speaker John Boehner as appeasers of their liberal foes. Now, just as many Democratic activists treat Minority Leader Chuck Schumer with the same disdain. There’s little doubt that the decision of Schumer and his Senate colleagues to treat the Kavanaugh confirmation as a political Armageddon in which anything goes is at least partly the result of pressure from a liberal base that would have reacted badly to a more civil effort to oppose the nomination.

But after efforts to brand Trump’s nominee an extremist and to turn procedural arguments about the release of his records fell flat, Christine Blasey Ford’s accusation that the judge attempted to rape her when they were both in high school has done more than hand Schumer an effective weapon to use against Kavanaugh. Though the case against Kavanaugh bears little resemblance to the credible Me Too charges that have taken down a host of other cultural, journalistic, and political figures, the decision of Democrats, with an assist from a helpful media, to treat Ford’s charge as unquestioned truth has changed the nature of the debate.

Democrats’ treatment of Kavanaugh has been shockingly shabby even given the high stakes. At this point, it’s not clear that there is anything he could ever do to clear his name whether he is confirmed to the High Court or not. Even if his public testimony refuting the accusations is credible and if Ford can’t provide hard evidence to back up her claim, it’s likely that at least half of the country will still think he’s guilty.

The manifest unfairness of this process will have unintended political consequences for both sides.

Kavanaugh’s fate may be seen by some as a warning that anyone — even the most seemingly clean-cut, unimpeachable figure — can be caught up in unprovable Me Too charges that can’t be effectively rebutted. But partisans may see it very differently.

Members of the Senate may take Feinstein’s skullduggery as just revenge for Garland’s treatment. But many ordinary Republicans will likely interpret the willingness of their political and media foes to take apart the reputation of a respected establishment figure as an indication that any remaining restraints on political combat must now be ignored. If that happens, what the Democrats are doing to Kavanaugh could be a seminal moment in our political history in which Trump-style politics become the rule, rather than an exception.

As much as Democrats may take grim satisfaction in the success of their assault on Kavanaugh, what they’re doing could very well reinforce Trump’s grip on his party and make it more likely that our politics are permanently remade in his image.