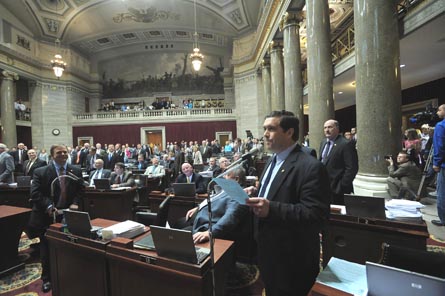 Later this month, a historic bill will take effect. A bill that took five years of negotiating, thousands of miles of travel across the state to find support and a little arm wrangling of both Democrats and Republicans along the way. It finally passed without any opposition because one individual saw himself as a voice for the voiceless.

“A passion and calling,” is how Jeff Grisamore describes his vision and mission to serve Missouri’s most vulnerable citizens.
“As Jesus said in Matthew 24, when you serve the least of these, you serve Him,” Grisamore says.

Grisamore, a former pastor and missionary, is a Missouri legislator representing most of Lee’s Summit and Greenwood. One of his most cherished responsibilities is serving as Chairman of the House Special Standing Committee for Disability Services in the Missouri House of Representatives and he’s building bi-partisan support for one of his greatest passions–serving the disabled.

“Back when I was asked to run for an open seat in the Missouri House in 2006, I told Republican officials that I would only do it if it expanded my ability to serve our most vulnerable citizens,” he says. That is something Grisamore has done for over 30 years.

Having served the vulnerable since the 1970s, Grisamore says “for me, defending the most vulnerable begins with standing for life and protecting the unborn,”

Grisamore and his wife, Mary, have 10 children, including three sons serving in the Missouri Army National Guard and a daughter who died from complications of Prader-Willi Syndrome in 2002. Their oldest son, Ben, is a Bronze Star decorated war veteran.

“I won some tournaments and lost more. I could usually tell by my third sentence if my oratory judge was pro-life or pro-abortion.”

Reflecting back, Grisamore says “In the 70s I spoke against abortion, in the 80s I picketed abortion clinics, and in the 90s I preached on valuing life and opposing abortion as a pastor.”

In the last five years I have been able to stand and speak for life on the floor of the Missouri House,” he says of his passion to defend unborn life.

Grisamore’s mission to the most vulnerable has also been international. “We lived among and served the poorest of the poor and most vulnerable,” says Grisamore, who served as a missionary in the West Indies from 1982 to 1985 with International Teams.

Along with years in ministry, both as a pastor and with para-church ministries, Grisamore has also worked in the for profit sector in sales, marketing, management and consulting.

His mission to the most vulnerable expanded internationally during the last decade when he served as the former president of Children of Promise International.

James 1:27 and Psalm 68:5 have been paramount to Grisamore’s sense of purpose.

“I am deeply moved by the call to care for orphans and widows in James 1:27,” he says.

“For Psalm 68:5 to say that God, in his Holy habitation, is a Father to the fatherless and a defender of widows says something profound about the very essence of who God is and what He wants from us.”

For years, Grisamore’s passion to care for orphans and widows led him around the world.

As a non-profit president, he helped lead mission partnerships and support to hundreds of projects in dozens of countries-from evangelism and church planting among the poorest of the poor and unreached to caring for orphans and widows through church-based orphan and widow homes.

His mission through Children of Promise also extended to feeding and nutrition programs, free clinics and schools and disaster relief.

In January of 2005, I accompanied Grisamore and a relief team he led to India and southeast Asia following the Tsunami of December 2004.

The series of stories, and award-winning photographs of my first-hand account in the tsunami zone, were published in the Metro Voice in 2005.

Following the terrorist attacks of 2001, Grisamore wrote a paper on “thwarting next generation terrorism through orphan care.” Days after sending it to the White House in 2002, Grisamore was summoned there for a briefing by President Bush.

In the years following, he made follow up trips to Washington, D.C. for meetings with White House officials and members of Congress, advocating for orphans and widows worldwide.

Against the backdrop of decades of serving vulnerable populations worldwide and later advocating for them in Washington, D.C., his path took a different turn in 2006.

In June of that year he was nominated by Republican officials to run for an open seat in the Missouri House of Representatives.

“It was something my wife and I prayed about and she got the Scripture from the book of Esther, “for such a time as this,” says Grisamore in describing his call to public service.

As a fiscal and social conservative, who espouses “responsible” and “compassionate conservatism,” Grisamore shuns social and economic justice mantras and what he describes as their “liberal redistributive underpinnings.”

Grisamore’s heart of compassion toward at-risk citizens quickly developed into a vision to serve the most vulnerable in Missouri. It became quickly apparent to him that Missouri was home to many underserved populations.

“Everyone in our House Republican caucus is pro-life and into the boiler-plate stuff like I am, such as catalyzing job creation, holding down taxes and government growth, and balancing the budget,” says Grisamore.

“At the same time, I saw an opportunity to get out front and advocate for our most needy citizens, like vulnerable seniors, at risk women and children and people with physical, developmental and mental health disabilities,” he continues.

“I believe that individuals with disabilities should be among those who receive the first portions of government funding,” says Grisamore, “and, instead, they have to fight for the crumbs off the table. I’m out to change that and resolved that I would fight and advocate for those most vulnerable populations in Missouri.”

As an advocate for Missouri’s most vulnerable, Grisamore has talked the talk and walked the walk. Known as a champion for children, advocate for the elderly and defending of the disabled, in 2007 he was honored as Freshman Legislator of the Year for Children and Senior Advocacy.

In 2008, he was elected Chairman of the Missouri Children’s Services Commission. In 2009 he was appointed to the Governor’s Council on Disability. In 2011, Missouri House Speaker Steven Tilley appointed Grisamore to chair the new House Committee on Disability Services. His Capitol office wall in Jefferson City is adorned with multiple awards he has received for his work to serve vulnerable populations.

He is the ranking majority member of the House Appropriations Committee on Health, Mental Health and Social Services and also serves on the House Budget Committee.

This year, he was able to get $3.29 million in cuts restored in the state budget for developmental disability community service providers and $712,500 restored for domestic violence shelters, such as Hope House in Lee’s Summit and Independence.

Grisamore’s crowning achievement this legislative session was sponsoring the passage of House Bill 555, an omnibus disabilities and health care package-and the first of its kind in Missouri. (To read more about HB 555, go to www.house.mo.gov.)

As the last bill considered in the legislative session completed on May 13th, HB 555 was taken up at 5:55 P.M. by Grisamore and passed unanimously just minutes before the constitutionally required end of session at 6:00 P.M. HB 555 was signed into law by Governor Jay Nixon (D) on July 12 and takes effect August 28.

Bill Kenney, a former All Pro quarterback for the Kansas City Chiefs, who currently serves as Chief of Staff to Missouri Lt. Governor Peter Kinder, said, “No one I have ever known has embodied servant leadership and a commitment to help our most vulnerable citizens more than Jeff Grisamore.”

Grisamore, now in his 5th year in the Missouri House, will be term limited in 2014. He describes his mission of serving vulnerable citizens as far from done.

“I’m a visionary and only fulfilled if I am doing things to change the world or big things right here in Missouri.”

“Being able to serve constituents and help Missourians in need is thrilling and drives my passion to serve. Getting folks in need, especially those with disabilities, funding and services they had not been able to get, is the best part of the job.”

Previous: How our prison system creates more criminals
Next: Who Cares About the Poor?