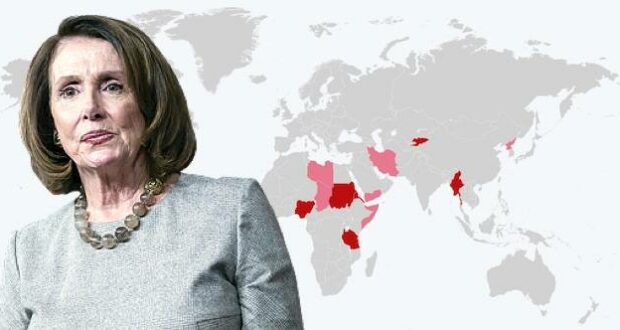 The action was in response to President Donald Trump who in 2017 issued bans for countries with significant terrorist activities. At the time Democrats and media outlets labeled it “racist” but it was upheld by the U.S. Supreme Court in a 7 -2 ruling.

On Wednesday the “National Origin-Based Antidiscrimination for Nonimmigrants (NO BAN) Act,” was introduced by Democrats and received just one Republican vote.

The Trump administration had argued that the media narrative that it was a “Muslim ban” was untrue saying it was focused on national security, not religion. Trump’s ban initially included terrorist hotspots of Iran, Libya, Syria, Yemen, Somalia – all of which were Islamist countries – but also North Korea, Chad and Venezuela. It was later expanded to include Nigeria, Myanmar, Eritrea, Kyrgyzstan, Sudan, and Tanzania each with significant terror organizations.

Tump revised the order several times as governments worked with the U.S. to ensure no individual on a terror watch list was allowed to travel and airport security was improved – particularly in Nigeria. The Trump administration was vindicated in the constitutionality of the ban by the Supreme Court’s ruling upholding it. On Wednesday, the bill for the NO BAN Act passed with a 218-208 vote, with all Democrats and one Republican voting to pass the bill. It will advance to the Senate for consideration.

But Democrats continued to say it was a religious ban and say the new bill prohibits religious discrimination in immigration-related executive decisions.

When the bill was originally brought to the House floor under the Trump administration, Pelosi stated, “In the Congress and in the Courts, House Democrats will continue to oppose the [Trump] Administration’s dangerous anti-immigrant agenda.  In the coming weeks, the House Judiciary Committee will mark-up and bring to the Floor the NO BAN Act to prohibit religious discrimination in our immigration system and limit the President’s ability to impose such biased and bigoted restrictions.  We will never allow hatred or bigotry to define our nation or destroy our values.”

The bill requires, among other things, that the State Department and Department of Homeland Security inform Congress about any proposed restrictions 48 hours before it is imposed.

The law also allows individuals already in the United States to sue in a federal court if they are “harmed” by the restriction.

The bill is opposed by Republicans who say it takes away a president’s ability to protect the nation from terrorists.

“President Trump invoked this authority against countries that were hotbeds of international terrorism and were not cooperating with the United States in providing basic information about travelers coming from these countries,” Rep. Tom McClintock (R-Calif.) said. “Now, the left calls it a Muslim ban. What nonsense.”

Previous: Netanyahu will not work with Islamist party, instead seek direct election
Next: Missouri House expels member for first time since Civil War