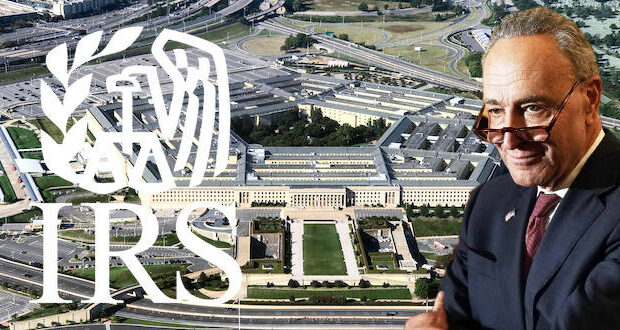 The IRS is about to become the largest federal agency after Democrats pass what they call the Inflation Reduction Act. The bill includes adding an additional 87,000 IRS bureaucrats making it larger than the Pentagon, the State Department and the Border Patrol…combined.

The enormous bill, which European media outlets are referring to as a “climate change” bill, brings the total amount of spending by Democrats since Joe Biden took office to $3.5 trillion.

Democrat Senators, with the help of Vice President Kamala Harris, passed the sweeping spending bill (pdf), estimated at $740 billion, without a single Republican voting in favor on August 7.

The package, which Republicans have panned as a tax-and-spend bonanza and the nonpartisan Congressional Budget Office (CBO) said would have a negligible impact on inflation, next goes to the House for consideration.

Assuming the bill clears all remaining legislative hurdles and gets signed into law by the president, this would bring the total amount of big-ticket spending by congressional Democrats under Biden’s watch to nearly $3.5 trillion.

The head-turning tally is arrived at by adding up the price tags of the American Recovery Act ($1.9 trillion), the Infrastructure Investment and Jobs Act ($550 billion), the Chips and Science Act ($280 billion), and the Inflation Reduction Act ($740 billion).

While CBO told Senate Majority Leader Sen. Chuck Schumer (D-NY) in an Aug. 6 letter (pdf) that it had not finalized all its estimates for every title in the bill, the ones that it did analyze show that the legislation would increase budgetary deficits during the 2022–31 period by a total of around $115 billion.

In remarks following the passage of the Inflation Reduction Act, Schumer called the legislative process a “long, tough and winding road, but at last, at last we have arrived.”

“The Senate is making history. I am confident the Inflation Reduction Act will endure as one of the defining legislative measures of the twenty-first century,” the Democrat lawmaker added.

Republicans have panned the measure, arguing that its business tax hikes would hurt job creation and, contrary to the bill’s name and stated intention, would actually add to inflationary pressures.

“Democrats have already robbed American families once through inflation, and now their solution is to rob American families a second time,” Senate Minority Leader Mitch McConnell (R-Ky.) said on the Senate floor, arguing that the bill would eliminate jobs.

The Tax Foundation, a think tank, said in an analysis of the economic impacts of the Democrats’ newest spending bill that while it avoids some of the bigger tax hikes contained in the Build Back Better Act, the new measure would raise taxes on work and investment, and so create disincentives for productive activity.

Overall, economists are divided over the Inflation Reduction Act, with some arguing that it will lead to lower consumer prices while spurring economic growth, and others predicting that the measure will worsen inflation and contribute to economic stagnation.

Previous: Sending your kid to school will cost a lot more this year
Next: University of Kansas offering course in “Angry White Male Studies”