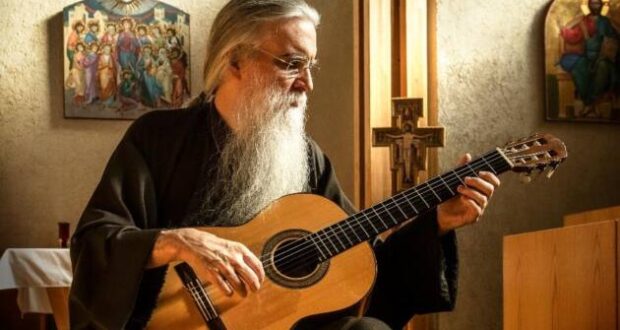 Protestants and Catholics, despite their theological differences, have much in common. Legendary Christian musician John Michael Talbot says they especially need to stand together today as the sanctity of life, religious freedom and the traditional family are being eroded. All too often, however, their relationship has been marked by suspicion and misperceptions.

Talbot, a pioneering Christian musician and author, has followed a journey that led him from evangelical Protestantism to Catholic monasticism. His music is beloved by Protestants and Catholics alike, and his monastery welcomes Protestants. Few Christians are more qualified to promote unity and understanding in the church.

“I was shocked to find the Catholic faith,” he said. “I didn’t want to be a Catholic, and I didn’t even like Catholics — I’m still working on that. But God gave me a word, and it was, ‘John, I want you to become a Catholic. My first church became sick and nearly died, but I’m going to raise it up, and I want you to be part of it.’ That word was personal for me, but I think it’s also corporate for the church today. It’s a word that Catholics need to hear. She’s been sick and nearly died, but I will heal her and raise her up.”

“Metro Voice” recently visited with Talbot at his Little Portion Hermitage near Eureka Springs, Ark., about the Catholic faith, the lessons Protestants can learn from monastic life and how to practice solitude and contemplation in a busy world.

From Jesus Movement to Monasticism

Talbot has deep roots in the country-rock sound and the Jesus Movement of the early 1970s. He and his brother, Terry, founded the band Mason Proffit, which many fans consider one of the most influential country-rock groups of the era. He and Terry then performed as the Talbot Brothers before John Michael began his solo career. “Songs from Solitude,” his 56th recording, recently was released, and he has sold more than five million records. 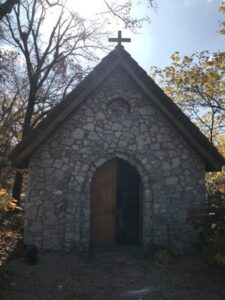 So what led a popular and influential musician in the early days of contemporary Christian music to convert to Catholicism?

“One of the reasons I became a Catholic is that I discovered the first 1,600 years of the church,” he said. “I immersed myself in it and became a Catholic. I believe in the very primitive expressions of Catholicism. My forte is in the apostolic fathers — Irenaeus, Tertullian, Clement of Rome, St. Ignatius of Antioch and St. Joseph the Martyr. These are the formative expression of what we call the Christian church.

“It’s from that that the Bible was even written, because we know the apocalypse was written at the same time that Clement of Rome was writing. Then it was compiled by the church throughout history. We have this thing called the biblios or collection of books. So to understand the Bible correctly, and if there is a debate over a passage of scripture that is dividing us today

— and I think there may be one or two — let’s go back to the early church from which the scriptures were birthed and see if they had an understanding of what it meant and how to live it. That was my big journey.”

Talbot founded Little Portion on land that he had purchased while playing in Mason Proffit.

“Jesus is our founder, the scripture is our ruler and our greatest law is love, guided by truth that comes to us from scripture, apostolic tradition and the teaching of the church,” he said. “The greatest expression of that is integration. We integrate seeming opposites through the cross into a harmony. Those integrations include stages of life, self-monastics, singles, celibates and married people with families. We also integrate the lay state and the clerical state, the charismatic and the liturgical, East and West and to some degree, Catholic and Protestant.”

Although Talbot is Catholic, his music has always been popular among Protestants as well. His brother, Terry, is a worship leader at a large evangelical church in Fresno, Calif. “We have about 20 percent non-Catholic participation in our domestic community,” he said. “A lot of them become Catholic. We don’t push anybody into the pool and force it on anyone. but they are just attracted to it.”

Although not every Christian is going to convert to Catholicism, much less adopt a monastic lifestyle, Talbot believes anyone can enrich their spiritual life by taking time to practice solitude and contemplation. 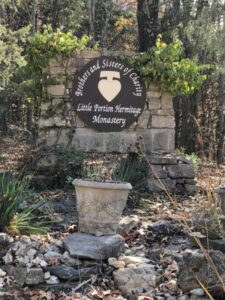 “Simplify your life and get rid of the clutter and noise so you can focus on Jesus,” he said. “It’s not because stillness is the end of it but so we can discover what God is saying. What is the Holy Spirit saying to us?”

Of course, this advice is much more difficult to practice than it is to preach. Talbot offers several practical suggestions.

“My advice first of all is that just as make an appointment to go to dinner with your spouse, make an appointment with Jesus,” he said. “You have to do that on a daily basis. Take 20 to 30 minutes in the morning or evening. Turn off the tablet, turn off the TV, don’t answer your phone. Just be with the Lord. Prayerfully read the Bible and really let the words soak in. Visualize Jesus as you read the words of scripture. Use your imagination in a good way, and then move beyond your imagination into intuition, which is where contemplation comes in. The rest of it is focusing, seeing Jesus, disciplining your body, living a disciplined life — that’s all the active life. “

He refers to this process as setting the table.

“The contemplative life is when Jesus shows up,” he said. “So you set the table for Jesus, and then he shows up. Setting the table is work, the things we can do. Turn off the TV, the phone, social media, have a quiet place in your house, have a prayer corner or prayer room. Do all that. That’s the work. Then you simply praise and worship God, you repent and then suddenly, he shows up. And when he shows up, there is nothing to do but simply be with the one who is. Jesus is the I am. Simply be with the one who is God’s name. I think that is something that is terribly missing.”

Talbot encourages Christians to commit to a more contemplative life in the new year. He also invites anyone – Catholic or Protestant — who is interested to visit Little Portion for a day or even a week or two. Guests are welcome to participate in the life of the monastery or simply spend time alone.

“You can’t give what you don’t have,” he said. “A lot of times in ministry we try to give what we don’t have. You can’t have it until you get it, and the way you get it is to be in a place where you are in really deep communion with God through Christ. Then you overflow. Monasteries are reservoirs, and ministry is an aqueduct of grace coming out of the reservoir of prayer. When you are in ministry, you can’t keep anything for yourself. All the water goes to those who need it. So traditionally, ministry has overflowed from monastic life all through the history of the church.

“Monasteries are places where you are separated from all and untied with all. You renounce all to gain everything.”

Talbot’s new CD, “Songs from Solitude,” and latest book, “Exploring the Gifts of the Spirit: Discovering the Power God Has for You,” are available at www.johnmichaeltalbot.com. Learn more about Little Portion or order gifts from its bakery at www.littleportionhermtage.org.

Previous: How to NOT Have a Blue, Blue, Blue Christmas
Next: Fueled by mercy, kindness wins