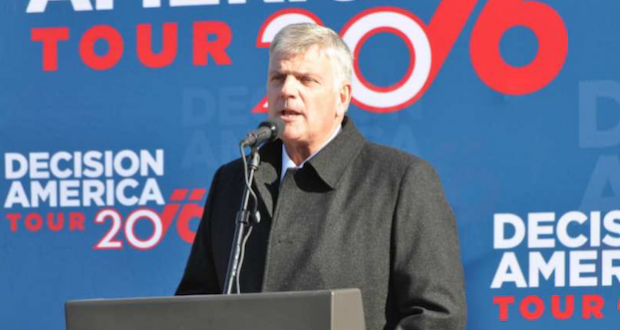 Franklin Graham is again a target of the cancel culture. More than 22,000 people have signed a petition calling for Graham to be fired from his leading roles at the Christian humanitarian organization Samaritan’s Purse as well as the Billy Graham Evangelistic Association because of his support for former President Donald Trump. The calls come as leftist groups, including elected Democrats, attacked the preacher numerous times over the past four years, including criticizing him for praying at Trump’s inauguration in 2016

“It’s no wonder the failed coup [at the U.S. Capitol] featured crosses and ‘Jesus saves’ banners and flags,” the petition states. “Graham and the religious right must be held accountable for their deadly dishonesty.”

Samaritan’s Purse has, in the age of the coronavirus pandemic, erected several field hospitals in states and cities, supplementing the care provided at hospitals where health-care workers are stretched thin. In the last couple of weeks Samaritan’s Purse opened respiratory care units in Lenoir, N.C., and Lancaster, Calif. Each of those field hospitals came to fruition at the request of local medical and political authorities who extended the invitations to Samaritan’s Purse. New York Democrats later demanded they be dismantled because of views held by Graham and the organization regarding traditional marriage, abortion and other biblical issues.

When the Democrat-led House of Representatives voted to impeach then-President Trump for the second time, 10 Republican lawmakers voted in favor of his removal from office. Graham vocally criticized those politicians, comparing them to Judas, the wayward disciple who turned his back on Jesus and handed Him over to the Roman authorities.

“These ten, from [Trump’s] own party, joined in the feeding frenzy,” Graham wrote in a Facebook post. “It makes you wonder what the thirty pieces of silver were that Speaker Pelosi promised for this betrayal.”

Graham extended an olive branch to President Joe Biden in a Twitter post shortly after the inauguration. He said he appreciated the new president’s address and urged both parties to work together. He also encouraged Biden to “stand up to those on Capitol Hill who want to impeach Donald Trump and tell them to put this behind us.” Graham concluded his message by adding: “I encourage everyone to pray” for Biden.