Home / News / Marines arrive in Baghdad to protect US Embassy 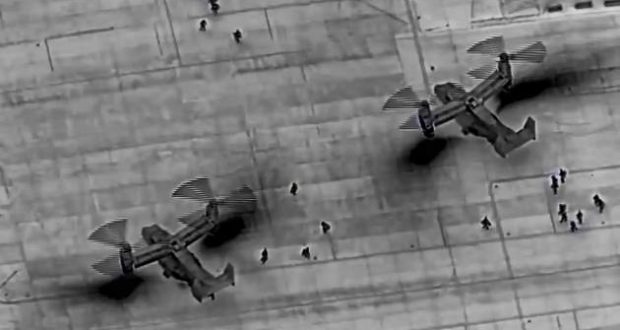 Marines arrive in Baghdad to protect US Embassy

After President Trump ordered 750 Marines to the area, Iranian-backed militiamen withdrew from the US Embassy in Baghdad. The arrival of the troops capped two days of violence by Iranians and Iraqi militia’s who attacked the embassy.

The actions also came after a headline about the violence in The New York Times was roundly criticized and mocked for describing the Iranian forces who were in uniform as “mourners” who were “protesting.”

President Trump has made it clear he doesn’t want to go to war and sources say up to 4,000 additional troops may be deployed to protect Americans from the growing influence of Iran’s Revolutionary Guard operating in Iraq.

Watch the US Marines arrive in Baghdad:

“I don’t think that would be a good idea for Iran. It wouldn’t last very long. Do I want to? No. I want to have peace. I like peace. And Iran should want peace more than anybody. So I don’t see that happening. No, I don’t think Iran would want that to happen. It would go very quickly,” Trump said.

Trump has been criticized by media outlets for his “withdrawal” from the Middle East, even as he has increased the number of troops in strategic areas. Trump called the news reporting “fake news” and backed up his claim with numbers from the Pentagon. The media has not retracted their earlier reporting.

The US blamed the militia for launching a rocket attack that killed an American contractor on a military compound in Iraq two days earlier. It was just the latest in a series of strikes by this militia.

“So this group has carried out, according to the US around 10-11 rocket attacks in the last six months,” said Seth Frantzman, Middle East expert and author of ‘After ISIS: America, Iran and the Struggle for the Middle East.’

But this time, the US struck back. And Frantzman said the American response was a game changer.

“It’s definitely the first time as far as I recall that the Americans actually responded against these militias despite the fact that hundreds of American soldiers have been killed and wounded by these groups over the years,” Frantzman told CBN News. “In the past, the United States was worried about tangling with Iran and I think finally, you know, they are willing to respond to this kind of harassment.”

Israel condemned the violence at the US embassy – one of America’s largest and most heavily guarded diplomatic missions in the world. Israeli Prime Minister Benjamin Netanyahu spoke with Secretary of State Mike Pompeo and commended the US on its action against Iran and its proxies in the region.

“It does put them on the same side as Israel and I think from Israel’s perspective they’re very happy to see the United States kind of wake up to the threat,” Frantzman said.

Israel itself knows it could be headed for battles with Iran. Israel Defense Forces (IDF) Chief of Staff  Lt.-Gen. Aviv Kochavi said last week Israel is preparing for what he called a “limited confrontation” with Iran.

“Israel wants to remove Iran from Syria and to not have them trafficking weapons in Iraq The United States, of course, just doesn’t want its soldiers being attacked. So Israel and America of course they’re allies and have the same view but they have slightly different long-term agendas,” Frantzman said.

The violence in Iraq comes as Iran and its allies have faced unprecedented mass protests in recent months. President Trump’s heavy sanctions have damaged Iran’s economy.

“Iran has been trying to push the Americans ever since the US left the Iran deal but also since the 1980s with the hostage crisis. Iran wants America out of the Middle East.  It calls the United States the Great Satan.  It says it’s resisting. It would like to destroy Israel and the United States eventually in the long-term.

The US maintains around 5,000 troops in Iraq at the invitation of the Iraqi government, in order to fight ISIS. Frantzman says a series of attacks against the US is meant to test America’s limits.

“And we’ve seen this in the Gulf also.  They attacked six oil tankers; they kidnapped a British oil tanker; they shot down a US drone. That means they’ve attacked on land, air and sea. This is a coordinated attack and I think that Iran was waiting to see, OK when will the Trump administration reply and when they reply, that will give us an excuse to go even further,” he said.