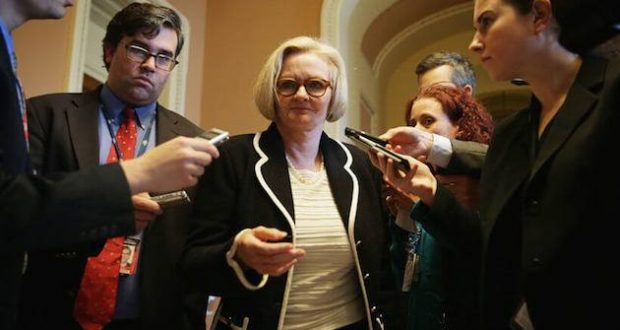 Claire McCaskill is not a white nationalist.

Even Republicans are dismissing claims by a St. Louis Democratic State Representative that Sen. Claire McCaskill (D-MO) is a white nationalist. But, elections are said to bring out the worst in people.

The incumbent McCaskill may have some awkward conversations with that legislator and other colleagues and allies whether she wins or loses next Tuesday.

In an interview with Fox News on Monday night, McCaskill strongly suggested she was thinking of Sens. Elizabeth Warren (D-MA) and Bernie Sanders (I-VT) when she ran an ad last week criticizing “crazy Democrats.”

“Well, I would say this,” McCaskill replied. “I would not call my colleagues crazy, but Elizabeth Warren sure went after me when I advocated tooling back some of the regulations for small banks and credit unions.”

…McCaskill went on to float Sanders’ name, although she didn’t specify exactly why: “I certainly disagree with Bernie Sanders on a bunch of stuff, um, so I’m not afraid. So I don’t know those kinds of things which do separate me, I think, from some of the knee-jerk folks that just are against the president no matter what.”

Metro Voice had interviewed Chappelle-Nadal in an attempt to see if she was sorry for earlier remarks about the President. She had told us she had turned a new leaf in her political descriptions of those with whom she disagrees.

As of Tuesday morning, Chappelle-Nadal responded suggesting that McCaskill is a white supremacist and calling her “Dixie Claire.”

Nadal’s statements won’t go too far in swaying voters though. Even McCaskill’s strongest Republican critics have never accused her of being a white nationalist. That charge would make folks on both sides of the political aisle chuckle.

Reached by phone, a Republican party official spoke to Metro Voice on the condition of anonymity saying, “Claire McCaskill may be many things but a racist white nationalist is not one of them.”

Warren and Sanders had not responded to broadsides from their colleague McCaskill.

Previous: Memorial to Jewish victims brings communities together but includes politics
Next: Congress, Trump come together for $6 billion bill to fight opioid crisis