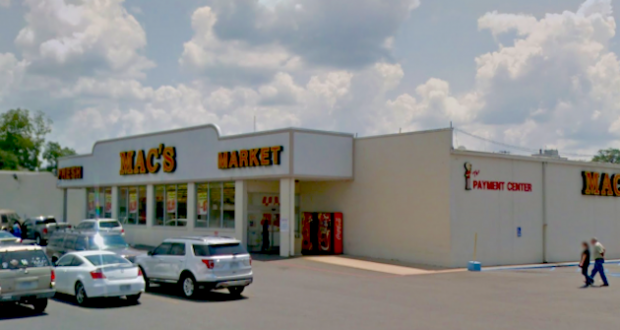 Mention of a wall around Heaven sparks boycott against small grocer

Opponents across the nation rallying against a southern grocer’s  comments about Heaven having a wall and gate may want to read the Bible.

Reggy McDaniel, who owns the Mac’s Fresh Market said he never expected to be called a racist after he published a line about walls and the narrow way into Heaven.

He has received widespread support as shoppers have rallied behind his supper ad that said, “Heaven has a wall, a gate and a strict immigration policy.”

The owner said that he hoped to harness the hot political topic of the southern border wall to get across his message about his faith. 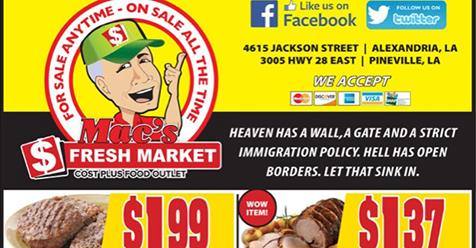 But don’t tell that to the grocer’s new enemies.

While he was expecting it might spark some controversy McDaniel, who owns the Mac’s Fresh Market said he never expected to be called a racist.

The mailer, sent out earlier this month, included a “Mac’s Weekly Quote” section at the top which said, “Heaven has a wall, a gate and a strict immigration policy,” the mailer said. “Hell has open borders. Let that sink in.”

“I appreciate them shopping with me, but this is America they have the privilege of shopping where they want to,” McDaniel told KALB.

The company’s Facebook page has been flooded with messages from individuals in big liberal American cities trying to instigate a boycott against the retailer.

Past mailers visible on the company’s Facebook page show that the weekly mailers often feature a small message near the top that refers to the owner’s faith as a Christian.

But the mention of the border wall prompted some backlash, with some people labeling the company as spreading “racism” and “fake religion.”

“You should be ashamed of yourself for claiming heaven has immigration policies. That’s not very Christian like behavior, I’m sure God is not happy with your disgusting racism and intolerance. I hope your store is boycotted by locals,” wrote one person.

McDaniel, told KALB it was all about his faith.

“That’s my meaning of the whole thing is are people prepared to go to heaven or are they not,” said McDaniel. “I thought it was a perfect time because everybody is talking about the border, some people want it, some don’t want us to have one.”

“The only thing I was shocked about was that it’s racist. I have never in my life been accused of being a racist, I’m 70 years old I haven’t evolved into one.”

He said he respects people’s choices if they no longer shop at the store.

“I am so just bustin up proud that you did not apologize!” wrote another Facebook user. “No reason to… we have rights to our opinion and should not apologize – those who are offended need to put on a big pair of pants and grow up!!”

Another person commented, “Most of the negative words are from people and trolls that don’t even live in Louisiana! Much less here. As of the flood of people I saw at the Pineville store yesterday I’d say it was a success!”

You can add your thoughts to his Facebook page by clicking here.

Previous: Modern day ‘Lassie’ breaks out, runs to get police and saves family
Next: South Korea will pay more to US after negotiations with Trump