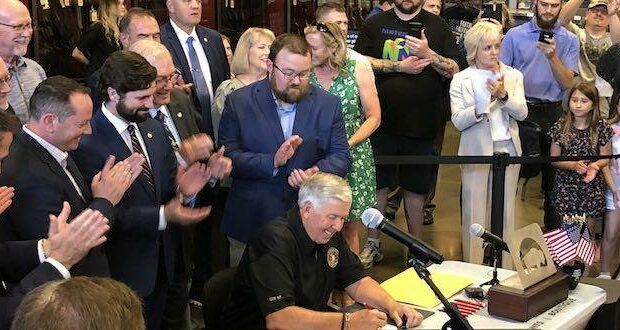 The bill, which had high public support, was approved earlier by the Senate in a 22-10 vote, and the House approved the measure by a whopping 111-42. It acknowledges that the right to keep and bear arms is fundamental and inalienable and that the nation’s federalist constitutional structure limits the federal government’s authority over states.

Parson signed the bill in Lee’s Summit, Mo. surrounded by state legislators and gun-rights proponents. The new law says is the duty of courts and law enforcement agencies in Missouri to protect the Second Amendment rights of citizens to keep and bear arms. It also declares federal laws that infringe on that right null.

“Throughout my law enforcement career and now as Governor of the state of Missouri, I have and always will stand for the Constitution and our Second Amendment rights,” Parson said to the crowd gathered at the shooting range Frontier Justice. “This legislation today draws a line in the sand and demonstrates our commitment to reject any attempt by the federal government to circumvent the fundamental right Missourians have to keep and bear arms to protect themselves and their property.”

It is seen by some as the most forceful response yet by states facing down the Biden administration. The governors of Arizona, Arkansas, Montana, Nebraska, North Dakota, Oklahoma, South Carolina, Tennessee, and West Virginia have endorsed gun rights measures adopted by GOP-led legislatures just since March. A total of 13 states have now enacted similar legislation.

The governor’s office stated in recent days that Parson is aware of the legal implications of this bill, but also that, now more than ever, “we must define a limited role for federal government in order to protect citizen’s rights guaranteed by the Second Amendment of the United States Constitution,” stated spokeswoman Keli Jones on Thursday.

The bill, she said, is about allowing Missourians “to protect themselves and acknowledging the federalist constitutional structure of our government.”

One of the policies the bill responds to is the use of stable braces. The Bureau of Alcohol, Tobacco, Firearms and Explosives (ATF) has proposed a rule that would pistols illegal if they had the popular accessory meant to increase accuracy in shooting. The controversial rule would define a handgun as a short-barreled rifle if it is equipped with a stabilizing pistol brace.

Gun-control advocacy groups and Democrats criticized the bill, saying it would violate the Constitution’s Supremacy Clause. Democrats have also argued that because Missouri has a relatively high number of shootings and murders, the measure would be dangerous.

“This bill has no benefit, and will interfere with the enforcement of the critical protections that help keep Missourians safe from gun violence,” gun-control group Moms Demand Action spokeswoman Tara Bennett said just before the bill became law. “There is no doubt this bill should not become law.”

But Republicans in the state legislature said that the federal government will continue to push for more and more gun control measures.

Parson is no stranger to serving in law enforcement. He was the Sheriff of Polk County before becoming a state legislator. Consequently, observers say he has a unique perspective on gun rights.

“HB 85 puts those in Washington D.C. on notice that here in Missouri we support responsible, law-abiding gun owners, and that we oppose government overreach and any unlawful efforts to limit our access to firearms,” Governor Parson said.