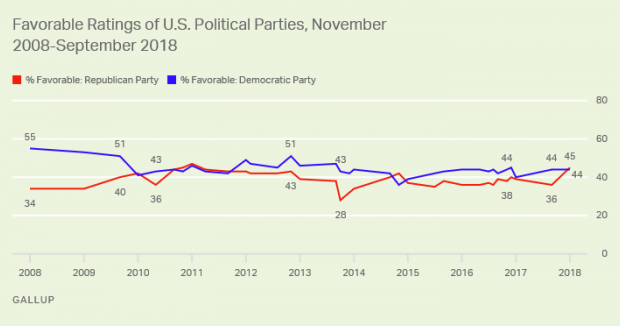 A Gallup poll shows forty-five percent of Americans now have a favorable view of the Republican Party, a nine-point gain from last September’s 36%. It is the party’s most positive image since it registered 47% in January 2011, shortly after taking control of the House in the 2010 midterm elections. Forty-four percent give the Democratic Party a favorable rating.

The new poll comes six weeks out from the November mid-term elections and during the confirmation process of Judge Brett Kavanaugh. National news media continues to tell viewers that Democrats are set to take back the house and Senate and begin impeachment proceedings of President Trump and Kavanuagh should he be confirmed.

The polls though, refute the media reporting about the unpopularity of both the President and Republican Party.

The parity in Republicans’ and Democrats’ favorable ratings marks a change from what has generally been the case since Barack Obama’s election as president in November 2008. Republicans have usually been rated less positively than Democrats over this time, with the Republican Party’s favorability rating for the last decade averaging 39%, compared with the Democratic Party’s 44%. 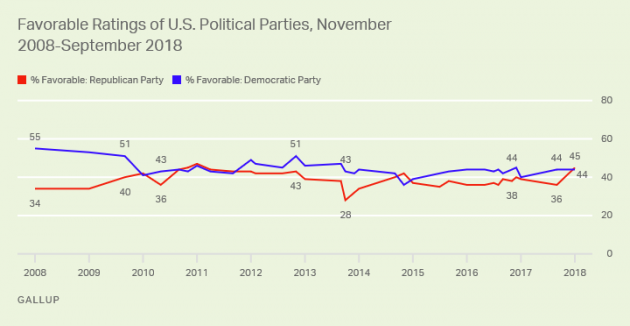 Only one other time in the last decade has the Republican Party had a significantly higher score than the Democratic Party. That one exception came in November 2014, immediately after elections that saw Republicans capture control of the Senate and expand their majority in the House, when 42% rated the GOP favorably and 36% the Democrats.

The overall increase in the favorable image of the Republican Party is a result of a jump in the positive views of Republicans, including independents who lean toward the party. The percentage of Republicans and leaners with favorable views of their party grew from 67% last September to 85% now.

At the time of last September’s poll, congressional Republicans were in the final throes of an unsuccessful attempt to repeal the Affordable Care Act, also known as “Obamacare,” and were losing a highly publicized battle with Democrats over a debt ceiling bill. Since then, Republicans have passed a tax cut bill that was supported by a vast majority of Republicans, and the economy has continued to make gains under the Republican administration of Donald Trump.

Two other major subgroups that tend to be more Republican than the overall population — men and those living in middle-income households — have become more likely to view the Republican Party favorably in the past year.

While Republicans have become significantly more positive about their party over the past year, Democrats’ views of the Republican Party and their own Democratic Party have essentially not changed.

For the Republican Party, less than two months away from an election that could see them lose control of both the House and the Senate, gains in public favorability are a welcome sign. The party has been wallowing in favorable ratings below 40% for most of the last five years after rarely sinking that low in the previous two decades.

No matter how much or how little party favorability affects elections, the fact that Republicans are more likely to view their party favorably than a year ago can be considered a positive indicator for the party, particularly if a more positive image boosts Republican turnout.

Although Republicans’ approval of a Congress controlled by their party remains low, Republicans apparently hold similarly positive perceptions of their party as they do of President Trump (81% favorable in this same poll).

Meanwhile, Democrats have been buoyed by numerous projections that they will make major gains in November, which could lead to a result similar to what Republicans experienced in 2010, when they scored a big election victory at a time when favorable views of both parties were about the same.

Previous: AMAC Urges Seniors to Enter Into a ‘Fitness Protection Program’
Next: 11 Things You Think About When You Run a Marathon